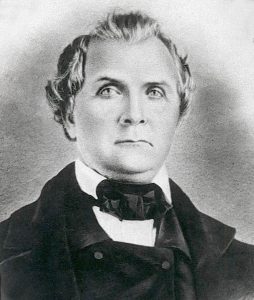 Thomas Johnson was a Methodist minister and member of the first Territorial Legislature of Kansas.

Johnson was born in Virginia on July 11, 1802. His parents were poor people, and he was thrown to his own resources almost from boyhood. At a comparatively early age, he went to Missouri, where he prepared himself for the Methodist Ministry and filled several positions under the auspices of the Missouri conference. In 1829, he married Sarah T. Davis of Clarksville, Missouri. The same year, he established the first mission school among the Shawnee Indians in Johnson County, Kansas, where he continued his labors for some 10 or 12 years when failing health caused him to resign.

He then went to Cincinnati, Ohio, for medical treatment, after which he lived near Fayette, Missouri, until his health was fully regained. In the fall of 1847, he again entered upon his work at the mission and remained there until after the passage of the Kansas-Nebraska Bill. On March 30, 1855, he was elected a member of the Territorial Council from the First District. He was a pronounced pro-slavery man and is credited with having brought the first freed slaves to Kansas.

In 1858 he retired from mission work and bought a home about two miles from Westport, Missouri. Notwithstanding his views on the slavery question, when the Civil War broke out, he stood by the Union. This caused him to become a marked man by the guerrillas and bushwhackers, and on the night of January 2, 1865, he was killed by a gang of armed men at his home. The bullet that ended his life passed through the door while he was in the act of fastening it to keep out the marauders.

Johnson County, Kansas, was named for him.