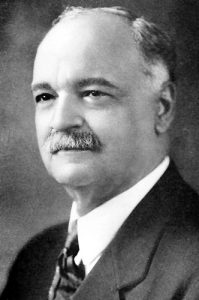 Charles Curtis, of Kanza Indian descent, was an attorney, United States Senator, and 31st Vice President of the United States.

Curtis was born in Topeka, Kansas on January 25, 1860, and educated in public schools. Afterward, he studied law and in 1881 was admitted to the bar. He then worked in a legal partnership until 1884 when he was elected County Attorney of Shawnee County.

On November 27, 1884, he married Annie E. Baird of Topeka. At the close of his first term as city attorney in 1886 he was re-elected for a second term of two years. In 1892, he was nominated by the Republicans of the Fourth Congressional District for Congress, and in November was elected. He served in Congress until he was elected to the Senate first by the Kansas legislature, and then by popular vote in 1920 and thereafter. Curtis served in the Senate from 1915 to 1929.

After the landslide victory of the Republican ticket in 1928, Curtis resigned from the Senate to serve as Vice-president to Herbert Hoover as President. The overwhelming problems of the Topeka led to the Republican defeat in the next election and Curtis’ term as Vice President ended on March 4, 1933.

Curtis stayed in Washington D.C. and resumed his legal career. He died there on February 8, 1936, of a heart attack. His body was returned to Kansas and buried at the Topeka Cemetery.

He was the first person with acknowledged non-European ancestry to reach either of the two highest offices in the United States government’s executive branch, and the last until Barack Obama’s election as president in 2008.