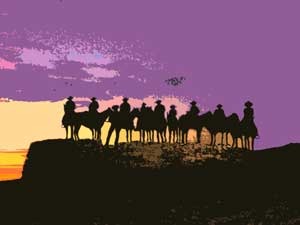 “Kansas has but one Dodge City, with a broad expanse of territory sufficiently vast for an empire; we have only room for one Dodge City; Dodge, a synonym for all that is wild, reckless, and violent; Hell on the Plains.” — A Kansas newspaper in the 1870s 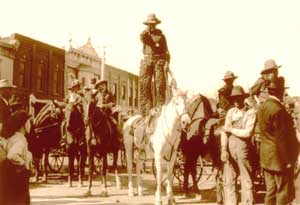 The Bloody Benders of Labette County 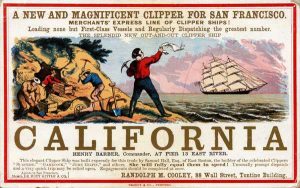 Before the discovery of gold in California in 1848, few but explorers, fur-traders, trappers, and hunters, ventured to cross the Missouri River into the wilderness of the vast West. The discovery of gold, however, on the Pacific Slope, created the wildest enthusiasm throughout the land, and a tide of emigration to California set in. Hundreds and thousands of ill-fated adventurers crossed the Missouri River, the Great Plains and the mountains — some of them to success, but more to disappointment, illness, and death. Though few people made their fortunes in the goldfields, the waves of people heading westward would continue for the next several decades — thousands of whom made their way along the multiple pathways through Kansas.

In 1854, Kansas became a territory when the Kansas-Nebraska Act was signed. A provision of the act allowed the settlers of Kansas Territory to determine by popular sovereignty whether Kansas would be a free state or a slave state. The differences between the northern states and the southern states had been broiling for years, and this provision brought people from near and far flooding into the new territory in order to sway the decision. For six years, political wars and bloody battles were fought in the territory in attempts to sway the state one way or another. During this time the territory was known as “Bleeding Kansas.”

In the meantime, gold was discovered in Colorado in 1858, creating even greater excitement throughout the country than did its discovery ten years before in California. Emigration rolled towards the new Eldorado with unexampled rapidity. A more motley tide of humanity never set in, north, south, east, or west. The year 1859 will ever be memorable for the number and miscellaneous character of travelers to Pike’s Peak. Old men and mere boys, educated and ignorant, saints and sinners, philanthropists and robbers, professional and lay — all defied hunger, cold, nakedness, and Indians, in their red-hot enthusiasm for gold-digging. The “Great Plains” swarmed with all sorts of animals and vehicles, conveying men, and some women, with goods and chattels, to the gold region. 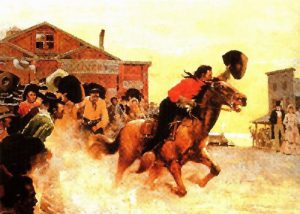 The next year, the Pony Express barreled through Kansas and other western states with its lightning-fast riders. Pioneers and traders also continued to utilize the Santa Fe, California, Oregon, and Mormon Trails, all of which made their way through Kansas. Other trails were also developed through the state for those headed to Colorado. In 1861 Kansas was finally admitted to the Union as a Free-State just months before the Civil War erupted.

When the war was over, plans began to be made to push the railroad through the state. This inspired numerous cattle towns — some wild and wicked — to be born. Places such as Abilene, Wichita, and Dodge City soon attracted every type of character — cowboys, scoundrels, outlaws, gunfighters, “ painted ladies“, and more. Some of these places are the very ones in which dime novels, radio and television programs, and movies would base their romantic portrayals of the Old West. Though there is little doubt that the Wild West spawned many adventurers, saloon brawls, and gunfights in the streets, in reality, life was hard. But, in its wake, it left behind a strength of character still to be found in the residents of Kansas. 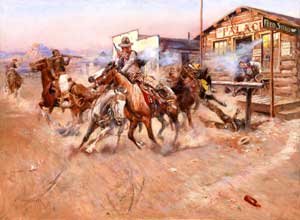 Smoke of a .45 by Charles Marion Russell.

Adventures in the American West

Tales & Trails of the American West