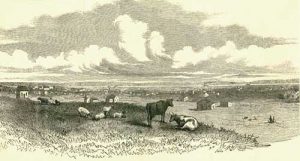 Jayhawkers – Terror in the Civil War

Jayhawking in the Bleeding Kansas Struggle

The Red Legs of Kansas 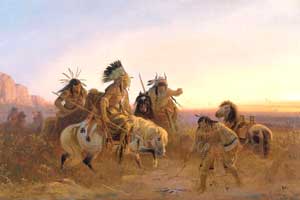 Kansas was an unorganized territory before 1854. It was home to numerous Indian tribes, including the Plains tribes such as the Cheyenne and Arapaho, and less nomadic Indians such as the Kanza, Pawnee, and Osage. After the Indian Removal Act was passed in 1830, about 20 different tribes from east of the Mississippi River were settled in the “Indian Territories,” which included Kansas. A few of these groups were the Shawnee, Delaware, Ottawa, Potawatomie, Cherokee, and others.

Of the white settlers, there were soldiers stationed at Fort Leavenworth, Fort Riley, and at Walnut Creek (Great Bend) to protect the travelers along the trails.

Several authorized trading posts were scattered over the Territory, including those at Elm Grove (now Gardner) and Council Grove, serving the Santa Fe Trail, and a significant post at Uniontown, located in western Shawnee County serving the Potawatomie tribe and California Trail travelers. Other white settlers included the many missionaries and their families working with the Indians at the Shawnee Mission in present-day Fairway, Kansas, Saint Mary’s Mission in present-day Shawnee County, the Catholic Osage Mission in Neosho County, and several others. 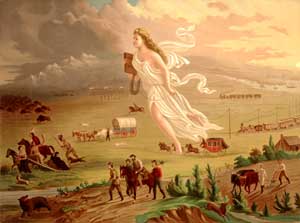 Though the tribes had been promised permanent reservations in Kansas, white settlers pushed hard for westward expansion. As a result, the federal government began negotiating another Indian removal in 1853. Most of the tribes were then removed to lands in the remaining portion of Indian Territory, which later became Oklahoma.

In May 1854, the U.S. Congress passed the Kansas-Nebraska Act, which created the territories of Kansas and Nebraska and repealed the Missouri Compromise of 1820 and allowed the territory settlers to determine if they would allow slavery within their boundaries. Though the initial purpose of the Kansas-Nebraska Act was to create opportunities for a transcontinental railroad, the act would instead create great tension focused on the slavery question, spawn the Kansas-Missouri Border War, and ultimately, the Civil War. In the end, it would be years before a transcontinental railroad would be completed. 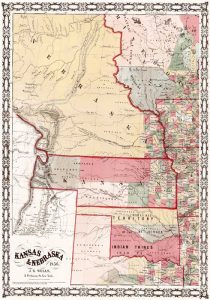 Even before the act was passed, Missourians, hoping to make Kansas a slave state, began to pour into the territory, claiming some of the best lands ceded by the tribes, even though their treaties had not yet expired. In the meantime, organizations were being formed in the northeast to send in a large emigration from the Free States. As more and more settlers flooded the territory, the “Kansas question” became the centerpiece of an emotionally charged national debate.

Some of the earliest settlers were pro-slavery men from Missouri, including Senator David Rice Atchison and brothers John H. and Benjamin F. Stringfellow, who established the pro-slavery town of Atchison. More pro-slavery men poured in to found the city of Leavenworth. In response, the New England Emigrant Aid Company and other groups were formed to promote and support Free-State settlement. In July 1854, they founded the cities of Lawrence and Topeka as  Free-State cities.

Though the vast majority of settlers were more concerned about bettering their economic situation and land rights than settling their nation’s slavery question, there were plenty of others to sway the territory their way. Within no time, the two sides began to square off, sometimes in violent battles, giving the name to the period known as Bleeding Kansas. Eastern newspapers gave sensational attention to what was going on in the territory. They fanned the flames, and the Republican Party emerged in 1854 to oppose the expansion of slavery in the territories.

Thousands of pro-slavery men from Missouri crossed the border into Kansas to stuff the ballot boxes.

The territory’s first governor, Andrew H. Reeder, was ambivalent concerning the issue of slavery. Upon his arrival in 1854, he directed his energies toward the business of land speculation and government. However, subsequent events would force him to choose, and he sided with the Free-Staters.

By early 1855 the first territorial census revealed a population of 8,500, and Governor Reeder called for a legislative election on March 30. On that day, nearly 5,000 Missouri men led by United States Senator David Rice Atchison and a group of prominent pro-slavery Missourians crossed the border to “help” the legitimate electorate elect pro-slavery candidates. The result was an elected vast majority of the 39 members of the Territorial Legislature being pro-slavery men. Free-Staters immediately cried foul, naming the new Kansas Territorial Legislature the “Bogus Legislature” and led to the Topeka Movement, an unauthorized shadow government that adopted its constitution and elected its legislature in late 1855. However, the Federal Government did not accept the Topeka Constitution, and they found the Free-State body illegitimate and in rebellion.

Meanwhile, Governor Andrew Reeder established a capitol building at Pawnee, Kansas, near the Fort Riley military reservation. He called for the territorial legislature to convene for the first time on July 2-6, 1855. The fledgling townsite of Pawnee was comprised of Free-State advocates, and Reeder had an obvious conflict-of-interest in choosing the site, as he owned stock in the town association, land in the area, and had recently built himself a grand log house there. The pro-slavery supporters, which comprised the vast majority of the legislators, were incensed. They felt that placing the new capitol at Pawnee, some 150 miles from the Missouri border, gave the Free-State advocates in Kansas Territory an advantage. However, Governor Reeder refused to back down.

While the Legislature had no intention of remaining at Pawnee, it needed to go. The legislative members traveled to Pawnee on horseback, wagons, and carriages. During that first meeting, they organized the government, elected officers, created both government houses, and transferred the capital, over Reeder’s veto, to the Shawnee Mission in what is now Fairway, Kansas. The Legislature then set their sights on having Governor Reeder removed from office, accomplished in late July. The official reason was his land speculations at Pawnee and in the Topeka area.

The Legislature knew that the Shawnee Mission location was temporary and began establishing a new capital at Lecompton, Kansas. In the meantime, they were busy crafting over a thousand pages of laws to make Kansas a slave state. The Legislature planned to meet at their new Constitution Hall in Lecompton on October 11, 1857, but, upon their arrival, they found several hundred Free-State men barring their entrance. They returned; however, eight days later, with some 200 soldiers. The legislatures then drafted the Lecompton Constitution that included slavery, but the U.S. government would not accept it. 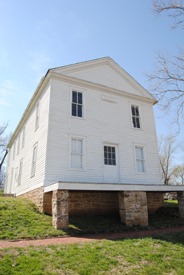 While the Lecompton Constitution was debated, new elections for the Territorial Legislature in 1857 gave the Free-Staters a majority government. The new legislature began to meet in Leavenworth, Kansas, in early 1858, and on April 3, 1858, the Leavenworth Constitution was adopted. This constitution would suffer the same fate as previous documents when the U.S. Congress refused to ratify it.

Following the Leavenworth Constitution’s defeat, the Legislature again crafted a new document, dubbed the Wyandotte Constitution. The convention assembled at Wyandotte (Kansas City, Kansas) on July 5, 1859. After much debate, a new constitution was submitted to the people for a vote passed on October 4, 1859. It was then sent to the Federal Government for ratification. Following numerous long debates in both the U.S. House of Representatives and the Senate, President James Buchanan authorized Kansas to become the 34th state of the United States on January 29, 1861. Only six days after Kansas was entered into the Union as a free state, the Confederate States of America formed between seven Southern states that had seceded from the United States in the previous two months.

Though the battle for Kansas was finally over, the conflict, which had earned the territory the nickname of Bleeding Kansas for the past six years, now engulfed an entire nation.