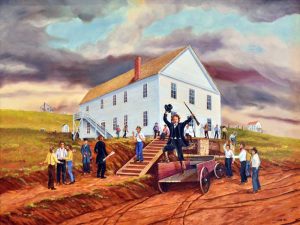 As the majority of Free State men in Kansas became larger and their heroic struggle for a free government was becoming better known throughout the nation, the pro-slavery advocates in Washington concluded to force a pro-slavery constitution in Kansas at once. Under its direction, on February 19, 1857, the Bogus Legislature called a Constitutional Convention at Lecompton.

The bill made no provision for submitting the constitution, when drafted, to a vote of the people. Governor John Geary vetoed the bill for that reason, but it was passed over his veto. The election of delegates was held on June 15, 1857, with the Free-State men refusing to participate. The convention met on September 7, 1857, and its proceedings ended on November 7, 1857.

When the convention assembled, it was organized with John Calhoun as President and Thomas C. Hughes as Secretary. Charles J. McIlvaine subsequently succeeded Hughes. Over the next several weeks, the constitution was written and adopted by the president, secretary, and 44 delegates.

The constitution was a lengthy document but its primary provisions of interest related to slavery provided:

Free negroes shall not be permitted to live in this State under any circumstances.” 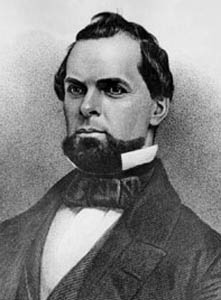 The schedule provided that after 1864 the constitution might be amended by a special convention, “but no alteration shall be made to affect the rights of property in the ownership of slaves.”

If this constitution could be once fastened legally upon the people, it was believed they would be permanently tied to slavery. It was the original plan to have the constitution adopted by the convention that drafted it and forward it immediately to Congress, which would then admit Kansas as a state under it. But Governor John Geary’s veto had exposed the conspiracy so that the convention conceived a thin subterfuge for the sake of appearances. The schedule provided for a popular vote under the supervision of three commissioners in each county to be appointed by the president of the convention. On the ballots were endorsed “Constitution with slavery” and “Constitution with no slavery,” so that everyone who voted must vote for the constitution, his only choice being with or without slavery. It was further provided that if a majority voted for the constitution with no slavery, then “slavery shall no longer exist in the state of Kansas, except that the right of property in slaves now in this Territory shall in no manner be interfered with.”

On December 21, 1856, an election was held under this call, the Free-State men not voting, resulting in 6,266 for the constitution with slavery and 569 for the constitution with no slavery. In the meantime, Governor John Geary resigned on March 4, 1857. Governor Robert Walker, appointed by President James Buchanan on March 10, 1857, and Secretary Stanton united in asking the Free-State men to participate in the election and guaranteed them a fair vote and honest counts. These fair promises and the great influx of northerners induced the Free-State men to change their whole policy. They went into the election of the territorial legislators on October 5, 1857, and elected a substantial majority of both Houses.

At three of the precincts, Oxford, Shawnee Mission, and Kickapoo, nearly 3,000 illegal votes were cast and Governor Robert Walker, true to his promise, set aside returns from the Oxford and McGhee precincts.

The action of Buchanan and his advisors in trying to force the Lecompton Constitution alienated the northern democrats, split the party at the election of 1860, and resulted in Abraham Lincoln being elected president.