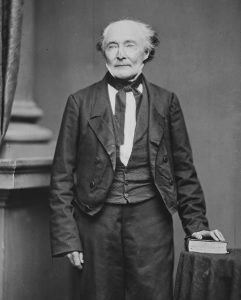 Robert James Walker was the fourth Territorial Governor of Kansas.

Walker was born in Northumberland, Pennsylvania, on July 23, 1801. He graduated from the University of Pennsylvania in 1821 and began practicing law in Pittsburgh the following year. He soon won distinction as a lawyer, became active in politics as a Democrat, and was an enthusiastic supporter of General Andrew Jackson for the presidency in 1824.

In 1825 he married a Miss Bache and moved to Natchez, Mississippi, about a year later. He was appointed to the United States Senate from Mississippi in 1836, and 1840 was elected for a full term. While in the Senate, he introduced the first homestead bill and the bill recognizing the independence of Texas. In his political career, he supported Jackson and Van Buren, opposed Calhoun, and it was through his influence that the Mississippi Legislature adopted resolutions denouncing nullification and secession as treason.

On the question of slavery, he advocated gradual emancipation and set an example by liberating his slaves in 1838. He was a prominent factor in securing the nomination and election of Polk in 1844. On March 5, 1845, he resigned his seat in the United States Senate to enter Polk’s cabinet as Secretary of the Treasury, where he served until 1849. As Secretary of the Treasury, he played an important part in formulating the tariff of 1846, which became widely known as the “Walker Tariff.”

On March 26, 1857, he was appointed governor of the Territory of Kansas by President James Buchanan. He resigned the governor’s office on December 15, 1857, his resignation having been forced upon him because he showed a disposition to accord fair treatment to the Free-State men in Kansas. At the beginning of the Civil War, he took a firm stand in favor of the Union. He was appointed financial agent of the United States in Europe, where he negotiated the sale of $250,000,000 of United States bonds and prevented the sale of $75,000,000 of Confederate bonds.