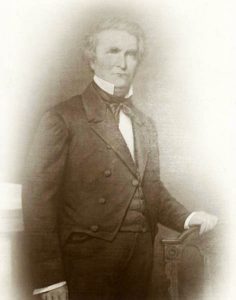 John Calhoun was the first surveyor-general of Kansas and a pro-slavery partisan.

Calhoun was born on October 14, 1806, in Boston, Massachusetts. He studied law in New York before moving to Springfield, Illinois, in 1830. While there, he became a surveyor and served in the military during the Black Hawk War. As a surveyor and soldier, he met and became a friend of Abraham Lincoln that lasted throughout their lifetimes. In November 1833, he founded the Chicago Weekly Democrat, the first newspaper in that town. The same year he became a surveyor for Sangamon County, Illinois, and took an active part in that period’s political life.

In 1838 he made many speeches during the campaign and was elected a member of the Illinois House of Representatives. In 1844 he was defeated for Congress and in 1846 was the candidate for governor of Illinois on the Democratic ticket but was again defeated. On August 4, 1854, Calhoun was commissioned surveyor-general of Kansas and Nebraska’s territories and made ex-officio register of the land offices, soon to be opened. He opened an office at Wyandotte, and the first report of his survey was made on October 26, 1856. He was a pro-slavery man, entered actively into the territory’s political life, and was president of the Lecompton Constitutional Convention.

By 1858, control of the Kansas Territorial Legislature had passed firmly into Free-State hands, and the new legislature initiated an investigation into the alleged fraudulent practices of the December 1857 election. This action prompted Calhoun to leave Kansas for the safety of Missouri. General  Thomas Ewing, Jr., who was a member of the committee appointed by the territorial legislature in 1858 to investigate election frauds, in a letter to his father dated January 18, 1858, said:

“Calhoun left for Washington today — fled. He would have been brought up for forging election returns, of which there is evidence enough, I believe, to warrant a presentment. He is the instigator of all the frauds, I have not a shadow of a doubt.”

The Kansas Historical Society has a manuscript entitled “A Vindication of John Calhoun,” written by his brother, A. H. Calhoun, in which it is claimed that Mr. Calhoun opposed the clause in the Lecompton Constitution establishing slavery and favored the submission of the instrument to popular vote, but the records of the convention do not corroborate these statements. Calhoun died at St. Joseph, Missouri on October 13, 1859, from the effects of an overdose of strychnine.