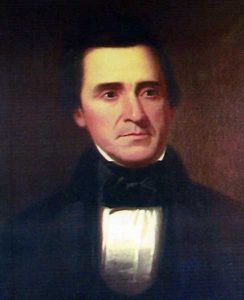 David Rice Atchison was a jurist, United States Senator, and a pro-slavery leader in Kansas.

Atchison was born in Fayette County, Kentucky on, August 11, 1807. His father, William Atchison, was an industrious farmer of influence in the neighborhood. At an early age, David was put in a grammar school but left it to enter Transylvania University, where he graduated. In 1828 he began to study law at the Lexington Law School, where he remained until he passed the Kentucky bar in 1829

He then went to Clay County, Missouri, located in the extreme northwest corner of the state. He quickly adapted himself to the life and society of the frontier; took part in politics, and soon became a prominent figure in the life of the country. In 1834 he was elected to the state House of Representatives of Missouri and in 1838 was re-elected. During this session he was chosen Major-General of the State Militia to operate against the Indians but never saw any active service. In 1840 he was defeated as a candidate for the State Legislature, and in 1841, he was elected to the bench of the Platte Judicial Circuit. Two years later he was chosen by Governor Thomas Reynolds to fill the vacancy in the United States Senate, occasioned by the death of Dr. Lewis Lynn; he was elected in 1844 to the position by the State Legislature and re-elected in 1849. At the time of the death of William R. King, the Vice-President Elect,  Atchison, being president of the senate, became ex-officio Vice-President of the United States.

When the question of the organization of the Nebraska Territory came before the Senate, Atchison opposed it, but at the next session favored it, and though the validity of the Missouri Compromise had not then been questioned, he proposed, regardless of restrictions, to introduce slavery into the territory. In the summer of 1853, he announced himself in favor of the repeal of the Missouri Compromise, and the following winter, he was a warm supporter of the Kansas-Nebraska Act. 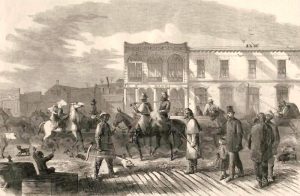 Atchison, the owner of many slaves and a plantation, was a prominent pro-slavery activist, was instrumental in establishing the pro-slavery town of Atchison, Kansas in 1854. He was also a Border Ruffian leader and deeply involved with violence against abolitionists and other free-staters during the days of “Bleeding Kansas.”

He aspired to the presidency and for some time his name appeared in the border papers as a candidate. He ran for the United States Senate in 1855 but was defeated. The following year he spent most of his time in Kansas leading the Platte County Rifle Company, but after the defeat of slavery in Kansas, he retired to his farm. At the beginning of the Civil War, he entered the Confederate service but soon retired because of dissatisfaction with the management. After the war, he lived in retirement until his death on January 26, 1886.