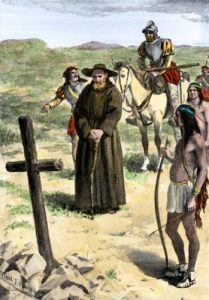 Francisco Juan De Padilla was a Spanish Franciscan friar who spent much of his life exploring North America with Francisco Vazquez de Coronado and was the first missionary to the Indians of Kansas.

A native of Andalusia, Spain, he spent his early life as a soldier, but exchanged the sword for the cassock and became an active member of the priesthood. He possessed talents of a high order, held several important positions in Old Mexico, and at one time was the guardian of a convent at Jalisco. He was one of the four Franciscans who accompanied Coronado on his expedition to Quivira and subsequently became a missionary to the Indians of that province.

There seems to be some uncertainty as to whether he remained among the Quivirans or went back to the tribe after returning to New Mexico with Coronado. Years later, General W.W. H. Davis found at Santa Fe, an old manuscript which gave the following account of Father Padilla: “When Coronado returned to Mexico, he left behind him, among the Indians of Cibola, the Father Fray Francisco Juan de Padilla, the Father Fray Juan de la Cruz, and a Portuguese named Andres del Campo. Soon after the Spaniards departed, Padilla and the Portuguese set off in search of the country of the Grand Quivira, where the former understood there were innumerable souls to be saved. After traveling several days, they reached a large settlement in the Quivira country. The Indians came out to receive them in battle array, when the friar, knowing their intentions, told the Portuguese and his attendants to flee, while he would await their coming, in order that they might vent their fury on him as the others ran. The other fled to a height within view and saw what happened to the friar. Padilla awaited their coming upon his knees, and when they arrived, he was immediately killed. The same happened to Juan de la Cruz, who was left behind at Cibola. The Portuguese and his attendants made their escape, and ultimately arrived safely in Mexico, where he told what had occurred.”

Noble L. Prentis, in his History of Kansas, said Padilla was killed by the Quivirans “because he had left them and was on his way to spread religion to other tribes. Padilla ordered the few who were with him to escape, and kneeling, met the savage attack. Friendly Indians piled stones about his grave, making a crude monument, which stands, crowning the summit of a hill near Council Grove.”

The monument mentioned by Prentis is about 10 feet high, 6 feet square at the base, and is constructed of loose, undressed stones. Father Padilla met his death in the fall of 1542, so that for more than three and a half centuries this rude structure, erected by the hands of uncivilized admirers, stood as a silent witness to the fate of the first Christian martyr in Kansas. The monument is located about 1.5 miles southwest of Council Grove. Another monument to Father Padilla was erected in the city park at Herington, Kansas, in 1904. It too continues to stand.