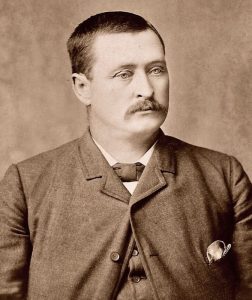 George Merritt Hoover was born in Canada on August 8, 1847. He came to western Kansas arriving in Ellsworth in 1871. However, he soon made his way to Ford County and became Dodge City’s second settler in June 1872. With a business partner named John McDonald, he set up the first saloon in Dodge City in a sod building but later built a wooden structure on Front Street.

He became the first elected mayor when Dodge City was founded and served four terms. He was also a County Commissioner several times and was elected twice to the state legislature from Ford County. He later was the founder and president of the State Bank of Dodge, a position he held until his death.

He married Margaret Carnahan in 1875 and raised a foster son, George Curry, who became one of the Roosevelt Rough Riders, and was the first territorial governor of New Mexico. By the time he died in July 1914, he had amassed an estate of at least $500,000, leaving $100,000 of it to Dodge City, in addition to thousands of dollars more for churches and $10,000 to build Hoover Pavilion in Wright Park, Dodge City. 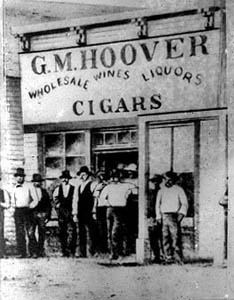 Compiled and edited by Kathy Weiser/Legends of Kansas, updated July 2021.