Indianola, Kansas in Shawnee County was situated at the crossing of Soldier Creek on the Fort Leavenworth-Fort Riley Military Road. It is an extinct town today.

The land for the town site north of Topeka, Kansas was purchased by legislator H. D. McMeekin and laid out in November 1854. A public sale of lots was held in June 1855, before the town company had been chartered. It was incorporated by the Bogus Legislature of Kansas Territory that year. 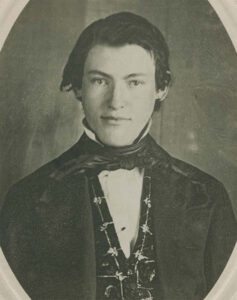 At the age of 19, Samuel J. Reader settled in the area and established a farm. In the next years, he kept a diary about local events, including Bleeding Kansas, area skirmishes, and Civil War events.

The town was comprised primarily of pro-slavery people who were often at odds with Topeka residents who wanted Kansas to be a Free State. Samuel J. Reader was a sergeant of the Indianola Guards, a local militia group that supported the Free-State cause. On August 30, 1856, pro-slavery supporters caused an incident and the local militia was brought in to prevent fire and theft. Although it was called the Battle of Indianola, there was no fighting.

In its early years, Indianola had a good frame hotel and other buildings were erected, and the town achieved a degree of prosperity,

Once the Civil War began, Company F of the Fifteenth Kansas Cavalry was recruited in the town to fight for the Union Army and many Indianola residents joined. In the next years, Indianola was overshadowed by Topeka.

After the Kansas Pacific Railway built its railroad line through Topeka in about 1865, residents began to move away from Indianola.