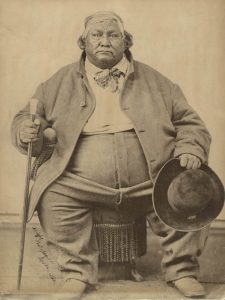 Abram B. Burnett was an Indian chief of the Potawatomie tribe, for whom Burnett’s Mound in southern Topeka, Kansas is named.

Burnett, whose Potawatomi name was Nan-Wesh-Mah was born in November 1812 on the north side of the Tippecanoe River near Fulton County, Indiana. His parents were Potawatomi Chief Shau-Uque-Be and Cone-Zo-Quah, the daughter of Chief Chebaas. At that time, the Potawatomi were a powerful tribe, numbering as many as 10,000. Living near Lake Michigan, the family was of importance to the tribe. He was educated at a Baptist missionary school for Indian children in Fort Wayne, Indiana, under the direction of the Reverend Isaac McCoy, a famous missionary. Later, he also attended a seminary at Bearswallow, Kentucky. Considered very intelligent, he was known to have read newspapers avidly. After his father died, he was adopted by his mother’s cousin, Abraham Burnett, who took his name.

In 1821 Reverend McCoy took Abram with him as an interpreter and traveling companion on a trip to visit other area Indians. The same year, a series of treaties would begin where the Potawatomie gave up their lands in Indiana, Illinois, and most of Michigan and began to move to lands assigned to them in northeast Kansas. Abram would become an important mediator for the Potawatomie tribe.

On June 5, 1838, Chief Burnett married a woman named D’Moosh-Kee-Kee-Awh. Three months later, he and his wife, along with the rest of the Mission Band were forced to move to a reservation in southeast Kansas, in what would become known as the Potawatomie Trail of Death. As the Indians traveled from Plymouth, Indiana to Kansas, a distance of about 660 miles, between September 4 and November 4, 1838, they were overcome by typhoid fever. This, along with the stress of the forced march led to the death of over 40 people, mostly children. 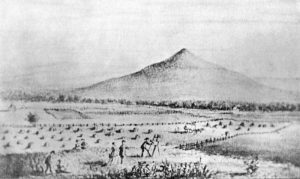 His first wife died in 1842. In 1843, on one of his many trips to Washington, Burnett met a young German woman named Mary Knofflock and married her. The couple would eventually have six children.

In 1848 Chief Burnett moved his family to the area that was later to become Topeka. There, he built a cabin and farmed a large plot of land near Burnett’s Mound along Shunganunga Creek and traded horses. Chief Burnett was an impressive figure. He was a physically large and powerful man, reportedly weighing more than 450 pounds in his later years.

Burnett developed a love of “fire-water” and began to make frequent trips to Topeka to satisfy his thirst, often imbibing more than was good for him. On some occasions, it was something of a task to get him into his spring wagon when he was in a state of intoxication.

It was said that when he went home drunk, he would test his German wife’s temper by throwing his hat at the window. If it remained in the house, he would follow it, but if it was thrown back out, he would retire until he was sober before attempting to enter his home.

Chief Burnett died June 14, 1870, on his farm near Topeka and his wife and children moved to the Potawatomie reservation in Oklahoma.

Burnett’s Mound, a natural formation on the south edge of Topeka, long served as a local landmark and reference point. For years, many people thought that the chief was buried there, but he was not. 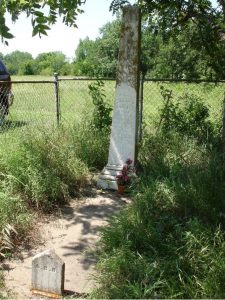 However, his grave is located nearby southwest of S.W. 29th and Wanamaker. Burnett’s grave is surrounded by a chain-link fence and is marked by a tall, marble tombstone.