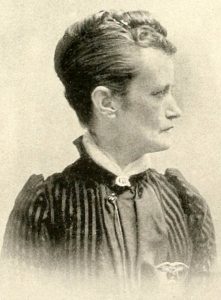 Annie Le Porte Diggs was a journalist and supporter of Populism and Women’s Suffrage in Kansas and across the nation.

Annie Le Porte was born in London, Ontario, Canada, on February 22, 1848, to Cornelius and Ann Maria Thomas Le Porte. When she was just two years old, her family moved to New Jersey, where she attended public school, studied with a governess, and also received more education at a convent.

She moved to Lawrence, Kansas in 1873 and married Alvin S. Diggs shortly thereafter. She soon began to attend the local Unitarian Church and developed a strong sense of moral responsibility that prompted her to work for temperance and women’s suffrage. In 1882, she and her husband began to publish a newspaper called the Kansas Liberal, and beginning in 1890, she was the Associate Editor of the Alliance Advocate. Seeking to wipe out injustice, Diggs also allied herself with the Farmer’s Alliance, aiding in the creation of the People’s (Populist) Party, touring the nation with the party in 1892. She later served on the Populist National Committee and supported the fusion of the Populist and Democratic parties in the 1898 election.

Throughout this time she continued to work actively for women’s voting rights and was the president of the Kansas Women’s Free Silver League and of the Kansas Equal Suffrage Association. In 1898, she was appointed the State Librarian of Kansas and was elected president of Kansas Press Women in 1905.  In 1906, Diggs moved to New York City where she worked on two publications: The Story of Jerry Simpson published in 1908, and Bedrock, published in 1912. She relocated to Detroit, Michigan in 1912 and died there on September 7, 1916.