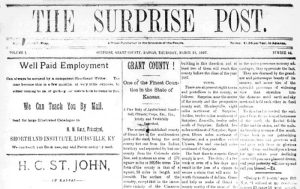 Appomattox, Kansas, an extinct town in Grant County, was located in what is now the northwest portion of Ulysses, Kansas.

A town with four names during its relatively short life, this small town was first established with the name of Surprise in 1885. A post office opened on March 17, 1886, in what was then, Hamilton County, as Grant County would not be created until 1887. Some of its first settlers were John Arthur, E. R. Watkins, Frederick Ausmus. Henry H. Cochran, and George W. Cook.

When the work on creating Grant County began, a number of settlers wanted Surprise to vie with Ulysses for the county seat. However, they were unable to come to an agreement with the Surprise Town Company so decided they would create a new town about two miles south of Surprise, which was first called Cincinnati, and soon, the two towns merged. However, the county seat supporters felt the town should have a more patriotic name like Ulysses, which was named Ulysses S. Grant. On May 26, 1887, the post office name was officially changed from “Surprise” to “Tilden,” named so in honor of Samuel J. Tilden who was a presidential candidate on the Democratic ticket in 1876 against Rutherford B. Hayes.

The town grew quickly and soon included a number of businesses, The Peoples Bank, three physicians, and the Grand Hotel. Though Tilden had laid the groundwork to become the county seat in 1887, the governor’s proclamation was not made until June 1888, which named Ulysses as the temporary county seat.

A few months later, an election was held to determine the permanent location of the county seat in October. The voters had to decide between Ulysses and Tilden, which resulted in the decision that the county seat would stay in Ulysses. But like many other Kansas Counties, the fight wouldn’t end there. With charges of corruption, the fight went all the way to the Kansas Supreme Court, where evidence was submitted by a Tilden partisan named Alvin Campbell. He introduced facts to show that the city council of Ulysses had bonded the people to the extent of $36,000 to buy votes, claiming that the total votes paid for were 388. It was an “open secret” regarding the voting fraud and “professional voters” had been brought in and boarded for the requisite 30 days before the election, and each given $10 each when they had voted. But, it was not known at the time that this had been done at public expense. It was also alleged that “professional toughs” were also hired to intimidate the Tilden voters.

The exposure of the fact that public funds had been used created excitement among the citizens of the county, who found themselves subject to the payment of bonds, and those to blame for the outrage retaliated upon Alvin Campbell by tarring him in August 1889.

It was also shown in court that Tilden had bought votes and engaged in irregular practices, and Ulysses finally won, though it was a dearly bought victory.

Sure they were going to win the lawsuit in the Kansas Supreme Court, the citizens of Tilden wanted to change the name to something even more patriotic. Colonel T.T. Taylor, who was president of the Surprise Town Company, and had served in the Civil War under General Philip Sheridan, wrote to him and asked him for an appropriate name for a town to be made the county seat of Grant County. In response, General Sheridan wrote Taylor back, suggesting the name of Appomattox, as that was where General Robert E. Lee had surrendered to General Ulysses S. Grant in the Civil War. On February 6, 1890, the town’s name was changed for the last time as the post office took on the official moniker of Appomattox. 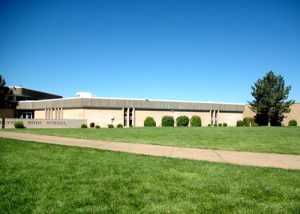 The town of Appomattox, which was in a desperate fight for the county seat against Ulysses was partially located on the present-day site of the Ulysses High School.

The County seat election was between Appomattox and Old Ulysses. In the end, it wouldn’t matter, as later that year, the Kansas Supreme Court ruled in favor of Ulysses, where it has remained since.

Many of the town residents and businesses then moved to Ulysses and the post office in Appomattox closed its doors forever on November 15, 1894.

Today the old townsite sits on part of grounds of the Ulysses High School.