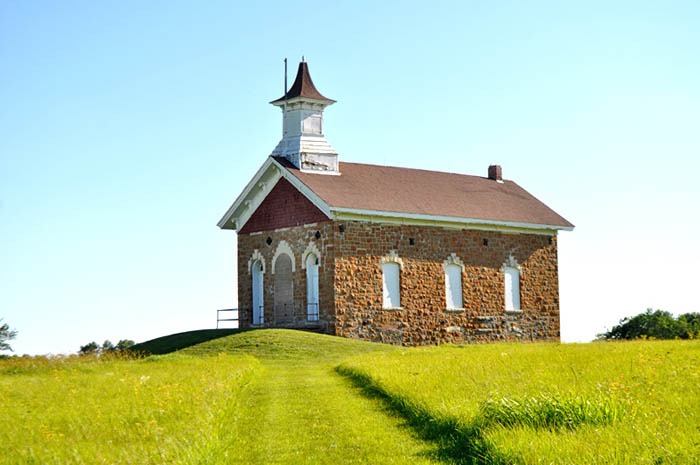 Arvonia, Kansas, was a small town in Osage County, was located on the Marais des Cygnes River about 12 miles southwest of Lyndon, the county seat.

An extinct town today, Arvonia was settled in 1869, by a company of Welsh people led by John Mather Jones. From Utica, New York, Jones was the owner of a Welsh-language newspaper.

The town was soon surveyed and platted by Jones, who had purchased land for speculation. To entice Welsh colonists to buy land in Kansas, Jones published a pamphlet entitled “Arvonia: That Is, The Welsh Settlement in Osage County.”

When the town was established, it was hoped that railroad tracks would be laid along the Marais des Cygnes Valley. The first general merchandise store was established by A. Humphrey which held the post office that opened on June 30, 1869. Humphrey became the first postmaster. Next, a hardware store was opened by Burton & Johnson and a steam sawmill was erected on the river north of the village. The school was taught in a private home and religious services were held regularly.

A large schoolhouse was built in 1872 and the first teacher was Mrs. Lavina Cottrell. The school was designed by pioneer Kansas architect John G. Haskell and is one of the earliest-known architect-designed schools in Kansas.

By the early 1880s, Arvonia boasted three stores, a hotel, a blacksmith and wagon shop, two churches, a schoolhouse, and a population of about 150. Among the leading men of the colony were J. A. Whitaker, of Chicago, a partner of Jones, John Rees, John Nai Jones, L. Humphrey, Evan Evans, David Lloyd Davis, and Reverend J. M. Barrows.

Unfortunately for the land speculators, the railroad did not come through the Marais des Cygnes Valley, and when this failed, a few of the leaders, who had expected a large town to spring up, became disheartened and left the area. Among these were John Mather Jones, and J. A. Whitaker, who had invested largely in property, expecting it to rapidly increase in value. The mill was also abandoned.

Arvonia’s post office closed on March 15, 1901, after which residents received their mail by rural delivery from Reading, which was the most convenient railroad station.

Although the town did not meet the expectations of early spectators, many Welsh families remained for generations. Most residents worked as farmers, but there were several cheese factories in the area and much attention was given to the dairy business.

The Arvonia School served as the only school for the Welsh community of Arvonia until the school closed due to consolidation in 1949. It still stands today and was listed on the National Register of Historic Placed in 2012. 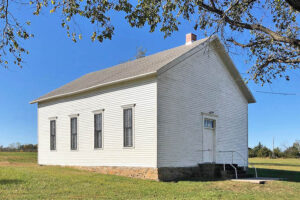 The Calvinistic Methodist Church, which was built in 1883 also still stands. It continued to serve as the center of religious and social activity until the congregation disbanded in 1968.

A few homes are also in the area.

The old community is located near the junction of South Arvonia Road and West 325th Street about four miles north of Lebo, immediately southwest of Melvern Lake in the southwest corner of Osage County.