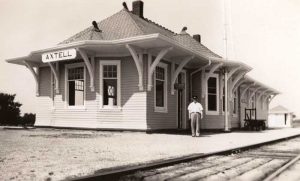 Axtell, Kansas,  unlike most other towns in Marshall County, wasn’t founded in the valley of some stream, rather, it was established on the high prairie land, from which an extended view may be had for miles. Located in the eastern part of the county — one mile from Nemaha County line — it was on the line of the St. Joseph & Western Railway, 89 miles west of St. Joseph, Missouri, and 24 miles east of Marysville.

The town received a post office in December 1871, with R.F. White as the postmaster. It was named for Dr. Jesse Axtell, an officer of the railroad company. J. Taylor, J. Hebbard, and David Smith donated 160 acres of land for a townsite, that was surveyed and laid off in January 1872 by the St. Joseph Town Company. The first building erected was put up by “Shoestring” Dickinson during the same year and used by him as a store for one year before R. F. White took it over. During the same year, the Railroad Company built a depot and side-track. 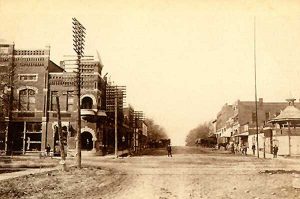 The first school was built in 1872-1873. Michael Murray, who moved to the newly established town of Axtell from St. Bridget, six miles north, opened a mercantile store on the north side of the railroad tracks, where all of the original businesses were located. Thomas Hynes, another St. Bridget resident, came to Axtell in May 1874 and built his drug store in 1875.

However, the town did not grow rapidly until the fall of 1879 and the winter of 1880, when a colony of 20 families moved to Axtell from Deep River, Iowa. The colony immediately commenced making extensive improvements, which soon made the village of Axtell a thriving community.

By the early 1880s, the town was called home to four churches, namely the Catholic, Presbyterian, Methodist, and Congregational, and a frame schoolhouse. In 1880, the school building was sold to the Catholic denomination, which used it for church purposes. A new building, measuring 26×42 feet, was erected during the same year for $2,000. The Wyandotte & Northwestern railroad was built into Axtell in 1889. 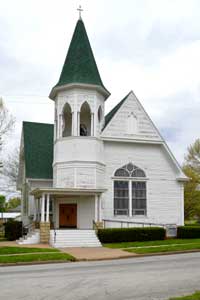 A beautiful church in Axtell, Kansas today by Kathy Alexander.

In 1908 the Axtell granite and marble works were established by William \/Verner, who learned his trade as a marble cutter in Germany. The next year, A. J. Ingram started the Axtell Produce Company, a large concern, doing a wholesale egg, butter, poultry, and feed business. The Labbe Brothers conducted an up-to-date moving-picture show, and two modern garages were under construction by I. W. Kerr and Joseph Severin.

By 1910 the town had two railroads — the Missouri Pacific and the St. Joseph & Grand Island. It also boasted banking facilities, a weekly newspaper, a money order post office with three rural routes, telegraph and express offices, and its population peaked at 748 inhabitants. That year, Stephen Stout presented the city of Axtell with a beautiful park, which was used for all public outdoor entertainments. The park included a fine baseball diamond and a good home team.

In 1912 the old school building was enlarged by adding two rooms, and in 1914 a two-story brick addition was made to the school.

By 1917, Axtell had reached fourth place in the county in population and business importance, having passed a number of the older towns. At that time, it boasted a population of 718, and all branches of business were well represented by proprietors who were abreast of the times and stores and shops that would do credit to a town much larger. 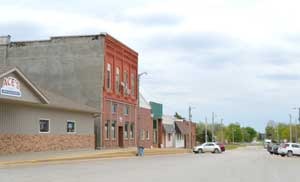 Axtell had a well-organized and fully-equipped fire department, and one of the leading industries was the Axtell telephone exchange, that operated 221 city phones and 27n rural lines. One of the potent factors in the growth of Axtell was the establishment of Gaylord’s department store. This was an up-to-date general merchandise store, employing ten clerks and handling an immense stock of goods.

For as well as it was doing, time took a toll on Axtell, and its population dropped over the following decades. Today, this small town is called home to about 400 people. Its post office and several businesses remain in operation.

Two miles north of Axtell on 30th Road, just south of Granite Road, is a marker for the site of the David Smith Inn, a stage station on the Overland Stage Route. The station and inn “became famous along the stage line on account of Mr. Smith’s management and Mrs. Smith’s culinary accomplishments.”

About 6.5 miles north of Axtell is the site of the now-extinct town of St. Bridget. The church and cemetery remain. The church is located on 29th Terrace between Bison and Cherokee Roads. The cemetery is located on 30th Road ¾ mile north of Deer Trail Road. 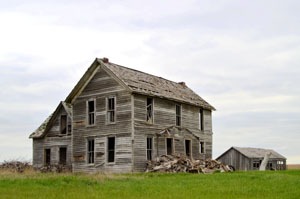 By Kathy Alexander/Legends of Kansas, updated May 2022.