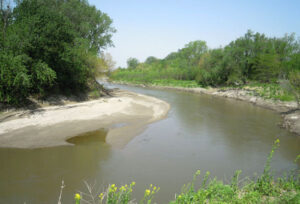 Most of the early recorded history of Nemaha County, Kansas centers around Baker’s Ford.

Baker’s Ford was located on California Trail at the crossing of the Nemaha River.

In January 1854, W.W. Moore of St. Joseph, Missouri, staked the first claim at the ford on the Nemaha River. In February of the same year, Walter D. Beeles settled to the north of Moore’s place, and in March, Greenberry Key; Thomas, John C. and Jacob B. Newton located upon the Nemaha River somewhat to the south, in April. John O’Laughlin, formerly of Iowa, accompanied this party from St. Joseph and took a valuable claim on Turkey Creek.

These early claims were taken without warrant, as there were no facilities for entry and no place at which payment could be made to the government.

That year, W.W. Moore and Walter D. Beeles built the first bridge on the Nemaha River, about half a mile below Baker’s Ford. The public was obliged to use the toll bridge because its owners felled a large elm tree in the ford, rendering it impassable. In the spring of 1855, during the period of great rain and flooding, the owners watched as they saw the elm tree carried away by the rush of waters. The bridge was then struck by the tree, loosened from its moorings, and was swept towards the Missouri River, a fair example of poetic justice.

In the meantime, W.W. Moore started a store, laid out town lots, and called the place Urbana. However, many people referred to it as Moorestown.

On July 4, 1854, a meeting of the settlers was held at Urbana, with the objective of arranging the protection of each other in their claims. At this meeting, John Castle was Chairman, and George T. Bobst, Secretary, both residents of Nebraska. Bobst had arrived on June 11, 1854, accompanied by Robert Turner, and settled north of Urbana just over the future Territorial line. At that time, no settlements except those in the vicinity of the Nemaha River had been established west of the Wolf River and Harding’s Station, an early settlement of Nemaha County, preceding the formal ceding of the Northern Kansas lands by the Indians.

The same year that Moore settled at Baker’s Ford, the Swiss began to locate on Four Mile Creek. They were farmers, built no towns, and took no part in politics. Since they could neither speak nor understand the English language, they lived pretty much to themselves. They lived, dressed, and worked following Swiss tradition. Even the children spoke nothing but Swiss until after a few years in school.

A post office was established in Urbana on March 3, 1855, but closed just a few months later on June 19, 1855. One historian would later write of the Urbana:

“Though it was a settlement it hardly deserved a distinguishing name, except as it was near the center of immediately subsequent settlements.” 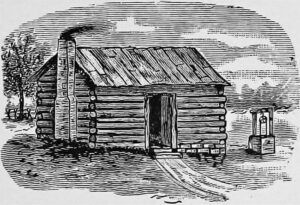 A cabin at Baker’s Ford, Kansas.

In the fall of 1855, and during the succeeding winter, the area settlers gathered from the signs and preparations of the Potawatomi Indians that as soon as the grass had grown sufficiently to support their ponies the war paint would be put on and the Indians would go on the warpath. The settlers naturally supposed that they were the intended victims and gathered in force, early in the spring, at Baker’s Ford. After some days of anxiety, they learned that the Pottawatomi, so far from premeditating an attack upon them, had gone forth in search of other their ancient enemies, the Pawnee, who they found, and by whom they were disastrously defeated. Assured of their own safety, the settlers dispersed to their farms.

As the land was taken up by settlers, more towns were laid out in the area, all within a few miles of Baker’s Ford. Richmond, a few miles south of Urbana, was made the county seat in 1855 when the county was organized. Other towns were Central City, Farmington, and Castle Rock, which was later named Seneca. In an election a few years later, Seneca won the county seat, and all the other towns folded up.

Miles N. Carter, a notorious horse thief, and murderer, was hanged at the ford on February 28, 1865. After Carter shot and killed John H. Blevins, he was imprisoned in the Seneca jail and to await the hearing on the next day. That night at 11 o’clock, he was taken by 20 men who overpowered the guard. The next morning his body was found hanging from a tree at Baker’s Ford.