Beaumont, Kansas, is an unincorporated community and semi-ghost town in Glencoe Township of Butler County.

Located in an area of rich farmland, it was settled by ranchers and farmers after the Civil War. Homesteaders from Missouri, Iowa, Tennessee, and other eastern states came because of the abundance of affordable land. The site was first a stagecoach stop on the route between Fredonia and Wichita.

In 1879 Edwin and Emma Russell built the Summit Hotel, named because it on the highest point between St. Louis, Missouri and the cattle shipping center of Ellsworth, Kansas on the proposed railroad line.

In 1880 the St. Louis and San Francisco Railroad made the site a refueling and repair stop on its route between St. Louis, Missouri, and Wichita, Kansas. A post office was established on June 3, 1880.

The Russells platted the town of Beaumont on March 28, 1881.

Because of the rich bluestem grass, the area was used as staging area to ship cattle back east. Beaumont soon established itself as an important railroad and ranching town. Early homesteaders included the pioneer families of Robert and James Van Huss, Brewer, and Phillips. 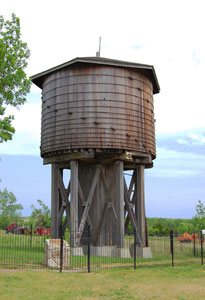 Beaumont boomed in the mid-1880s as railroads invested heavily in the American West. In 1884, the Kansas City and Southwestern Railroad, a Frisco subsidiary, announced plans to make Beaumont a terminal point for its rail line south to Latham, Arkansas City, and on to the Oklahoma border.

The Beaumont St. Louis and San Francisco Railroad Water Tank was constructed in 1885. The tower is made from sawcut and milled cypress staves bound by steel bands and had a fifty thousand gallon capacity. The tank is covered by a six-sided shingle roof and is 40 feet tall. It was used to refill the boilers of steam locomotives. The nearby Beaumont St. Louis and San Francisco Railroad Retention Pond held the water supply that was piped to the water tank alongside the tracks where the steam engines were re-supplied. The eventual adoption of diesel-powered locomotives eliminated the need for large amounts of water. Eventually, the tower fell into disuse by the railroad but it remained vital to the Beaumont community. The pumping station was kept active and pipe was laid throughout the town for potable water supply. The tower continued to hold water until 1988. Today, the historic tank still stands in Beaumont wand was listed on the National Register of Historic Places in 1993. A sign at the site claims it was the last water tank used in regular railway operations in the United States. It stands across from the hotel.

In 1885, the Durham Cattle Company, which boasted cattle pens that held 3,000 head, purchased the hotel. With its vicinity to the stock pens, the hotel served as a meeting point between ranchers, cattle buyers, and railroad officials, as well as traveling salesmen, train crews, and the general public.

At that time, Beaumont had a newspaper whose principal purpose was to promote its exploits to potential eastern investors. However, the Beaumont Business, published by speculators in nearby  Augusta from September 1886 to November 1887, was short-lived.

A roundhouse was built in 1890 across from the Summit Hotel and employed 90 people. 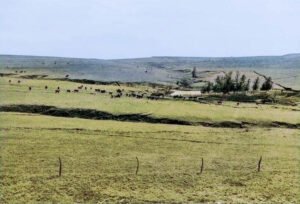 Cattle in the Flint Hills of Kansas.

In 1895, Reed Church purchased the hotel and became the “hotel keeper.”

Although Beaumont never met the expectations of the 1880s boosters, it began to show signs of permanency in the early 20th century.

By 1900, 14 people were living at the hotel. These included Reed; his wife Jennie; his son Charlie, who was working at a livery stable; ten boarders, mostly railroad workers; and an 18-year-old servant girl.

The Beaumont School graduated its first class in 1903. In 1905, prominent Beaumont resident William H. Squier opened a hardware store and a lumber yard on Main Street.

Reed Church’s son Charlie Church took over the hotel in 1910 and operated the hotel through the peak years of high crop and oil prices.

In 1910, Beaumont was still a station on the St. Louis and San Francisco Railroad and remained a shipping and supply point for a rich agricultural district in the eastern part of Butler and the southwest corner of Greenwood Counties. At that time, it had a money order post office, telegraph and express offices, telephone connections, and a population of 200.

During this time, Dr. William James Phillips, a rural doctor and emergency surgeon for the Frisco Railroad at Beaumont, doubled as the town’s pharmacist. 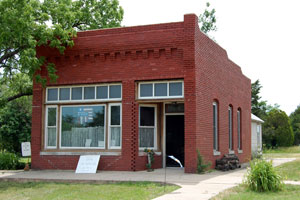 In 1915, the Beaumont State Bank moved from a “frame store building across Main Street” to a modern brick building. The bank was chartered with $10,000 in capital in June 1911 and the new building was constructed during a period of local prosperity that reflected the community’s second period of growth. This was at the time that the regional oil industry prospered. During this time, other new buildings were built and businesses, including the hotel expanded.

By the mid 1920s, Beaumont was plagued by plunging oil and crop prices. Among the casualties of the Great Depression was the Beaumont State Bank, which closed in 1934. The building was listed on the Kansas Register of Historic Places in 2011.

The trend toward urban living and decreasing prominence of the railroads caused Beaumont’s population to decline.

By 1930, the hotel was owned by Samuel D. Westfall, who gave up farming to become the “hotel proprietor.” The Westfalls were credited with opening the restaurant to the public. Samuel’s wife Ella identified herself in the 1930 Census as the hotel’s cook. Then, the Westfalls were living at the hotel with their two children and two lodgers. The Westfalls sold the hotel in 1945 to Nell Rauch, who sold the building to Mr. Coonrod in 1947. 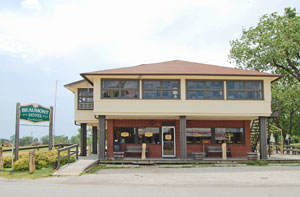 In the 1950s, Beaumont became a bedroom community for the growing number of aircraft workers commuting to nearby Wichita. Since 1953, the community has been known as the home of the Beaumont Hotel, which caters to aviators and ranchers who land on the nearby grass airstrip. Tourists also come to see the Beaumont water tower, the last steam engine tower left on the Frisco line. Although the region’s ranching and oil economy continues to thrive, Beaumont’s population has continued to decline.

The Beaumont Hotel took on its current form in 1953 through the vision of local rancher and entrepreneur James Clinton “Clint” Squier. A former banker and rancher, the hotel became an extension of his ranching operation, a place to house the “migrating Texas cattlemen who sent their cattle to his Flint Hills ranch.” By the time Squier purchased the hotel and began remodeling it in 1953, his business associates were already using the adjacent pasture as a grass airstrip. Soon, the hotel and its restaurant were attracting ranchers, hobby pilots, and daytrippers from nearby Wichita.

In 1962, Squier removed the fence between the hotel and airstrip and pilots began to taxi their plans from the airstrip and parked in front of the hotel. The fly-in hotel and restaurant gained national acclaim, with features and advertisements in National Geographic and Fortune magazines. 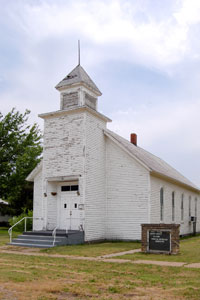 An old church in Beaumont, Kansas by Kathy Alexander.

Squier’s wife Leona helped manage the hotel until her death in 1957. In the late 1960s, with the help of Squier’s second wife Gladys Hodge, the restaurant was serving 200-400 Sunday dinners. The rancher, who in his own words had “never been off the ground,” became an icon among pilots. In 1978, when Squier was 82 years old, he approached the Savute family, regular customers who operated a successful Italian restaurant in Wichita, about buying the hotel. Squier continued to “hold court” at the hotel until his death in 1980. The Savutes owned and operated the hotel and restaurant until the late 1980s.

In the meantime, Beaumont’s school closed in 1967, consolidating with schools in Leon.

Today, Beaumont maintains a private airfield directly next to the town and the Beaumont Hotel, RV Park, and restaurant still caters to customers. As of the 2020 census, the population of Beaumont and nearby areas was 36.

Beaumont is about 20 miles southeast of Eldorado.

“Beaumont was one of the most important cattle shipping points in the Flint Hills during the first half of this century… each spring, thousands of cattle were shipped in by rail to pasture on the bluestem grass. Most of the cattle came from Texas… Beaumont had stockyards that could handle 3,000 head of cattle at a time. There was also a depot, with a night telegrapher and a day telegrapher, and an agent… The roundhouse had six engine stalls, with pits underneath for inspection and repairs. Eight workers staffed the roundhouse.”