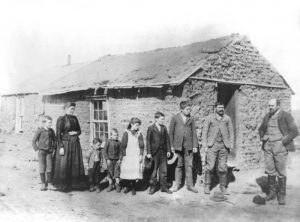 Bellefont, Kansas, is an extinct town in Ford County.

Long before the village of Bellefont was officially established, it had a post office that first opened in April 1878. A town was officially platted in July 1885 by J.A. Cline and George M. Hoover, landowners who believed that it would become a railhead for the Atchison, Topeka & Santa Fe Railroad. However, the railroad did not build a junction there, and the community never developed very much.

The town was a small farming community for several years, once boasting a general store, a grocery store, and a depot in its early years. By 1896, the post office was closed, but it reopened in 1904.

By 1910, the population was just 40, but the town still served as a shipping and supply point for that part of the county. The town’s post office closed forever on May 29, 1957.

It was located about 22 miles northeast of Dodge City on Highway 50. Today there are but a few farms and a grain elevator.