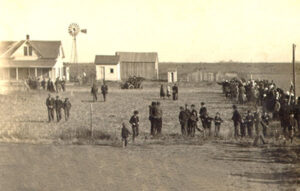 Belmont, Kansas is an extinct town in Kingman County.

W. H. Starr was one of the founders of the community. It gained a post office on July 15, 1879. A station on the Missouri Pacific Railroad, Belmont showed much promise in its early days. At one time, there were several churches, a brick general store operated by Mr. Starr, a meat market operated by one of his sons, a Woodmen of the World meeting hall, a school, a blacksmith shop, and a railroad depot.

In 1910, the town had a money order post office, an express office, a public school, some retail trade, and a population of 150.

After almost a century, its post office closed on September 16, 1971. There are still a few scattered homes in the area and a grain elevator.

It is located 12 miles southeast of Kingman.