Big Springs, Kansas, located in the northwestern part of Douglas County, is the oldest settlement in the county.

The area had long been well known as an excellent watering place along the Oregon Trail and when Kansas Territory was opened for settlement, a number of men immediately took up claims in the fall. The early settlers were abolitionist supporters at a time when the fledgling territory was in limbo as to whether it would declare as a “Free-State” or a “pro-slavery” state.

Some of the first settlers were William Harper, John Chamberlain, and Ephraim Banning, as well as Mrs. Roberts, Wells, Eppuson, Lawson, and W.A. Cardwell. Soon, a settlement was formed and called Big Springs for the large ever-flowing springs in the immediate vicinity.

On June 10, 1855, the first sermon was preached by Reverend W. A. Cardwell, a United Brethren minister, in the log house of Ephraim Banning. The United Brethrens would also build the first church in Big Springs in 1856. 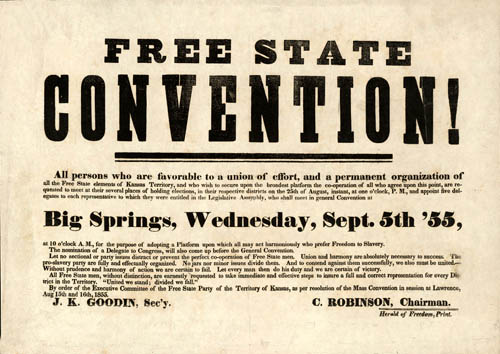 A store was also opened in 1855 by Webb & Carter, soon followed by the Harper House and the Picken Hotel which provided lodging for the many travelers along the Oregon Trail.

On September 5, 1855, the first Free-State convention was held at Big Springs. Referred to as the Big Springs Convention, all of the leading Free-State men were present, among them Ex-Governor Andrew H. Reeder, Governor Charles L. Robinson, General James H. Lane, George W. Smith, J. A. Wakefield, James S. Emery, and many others. Sure that great work was to be accomplished on that day, men came from all over the territory in wagons, in carriages, in vehicles of every description, on horseback and on foot, and all in the most solemn and determined earnestness. And each one after the manner of the patriots of the Revolution pledge his life, his property, and his sacred honor, if need be, to establish freedom in the State of Kansas. The spirit of the convention was embodied in the following resolution, written by Ex-

“That we will endure and submit to these laws (the bogus laws) no longer than the best interests of the Territory required, as the least of two evils, and will resist them to a bloody issue as soon as we ascertain that peaceful remedies shall fail, and forcible resistance shall furnish any reasonable prospect of success; and that in the meantime we recommend to our friends throughout the Territory the organization and discipline of volunteer companies, and the procurement and preparation of arms.”

This meeting and many more to follow would eventually result in the Bleeding Kansas saga, as Free-Staters and pro-slavery advocates waged a bloody war for the next four years.

In the meantime, Big Springs was continuing to grow and a post office was established on January 7, 1856, with John Chamberlain as the first postmaster. The first school was taught in the town hall in the same year.

Another Kansas “first” also occurred in Big Springs in 1856 when area citizens rallied to confront alcohol, in what was one of the first temperance meetings in the territory. The whole affair began when a local physician named Dr. Carter brought in three barrels of whiskey and started a saloon. 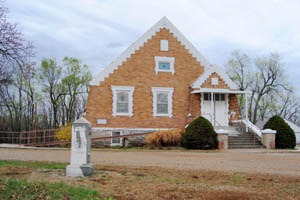 Just one night after he opened his business, 30 residents sent Dr. Carter a formal notice protesting the tavern. But when the doctor ignored their complaints, a mob of about 40 people stormed his saloon the next night, emptied the whiskey barrels, and stood atop the kegs giving prohibition speeches. Afterward, the protesters signed a temperance pledge. This was just the beginning of a crusade to prohibit alcohol in Kansas, which would continue until Prohibition was enacted in 1881.

Though it was one of the first settlements in the county, Big Springs did not grow quickly as it did not have a railroad. By 1883, it had only two stores, the post office, a blacksmith shop, a wagon shop, three churches, and about 40 residents. On September 30, 1903, the small settlement lost its post office.

By 1910, the population was about the same — around 40 people, and had three churches, a blacksmith and wagon shop, and several dwellings. No mention of any stores was made at this time. 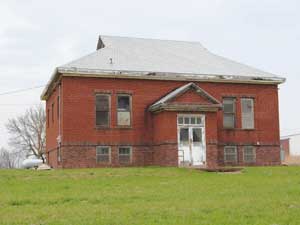 After all these years without growing, Big Springs still exists as a semi-ghost town. The unincorporated community gets its mail from nearby Lecompton and continues to support a fire station. The small town has developed into somewhat of a bedroom community between Topeka and Lawrence and its residents, from outward appearances, still looks to be about 40. Children attend school at the nearby Shawnee Heights School District in Tecumseh.

The 1856 United Brethren Church continues to stand and today serves as an active Methodist Church. Nearby, is an old red brick school and throughout the area can be seen a number of native stone buildings, some restored to perfection and others in various stages of deterioration.

Big Springs is located about 30 miles southeast of Topeka on U.S. Highway 40. 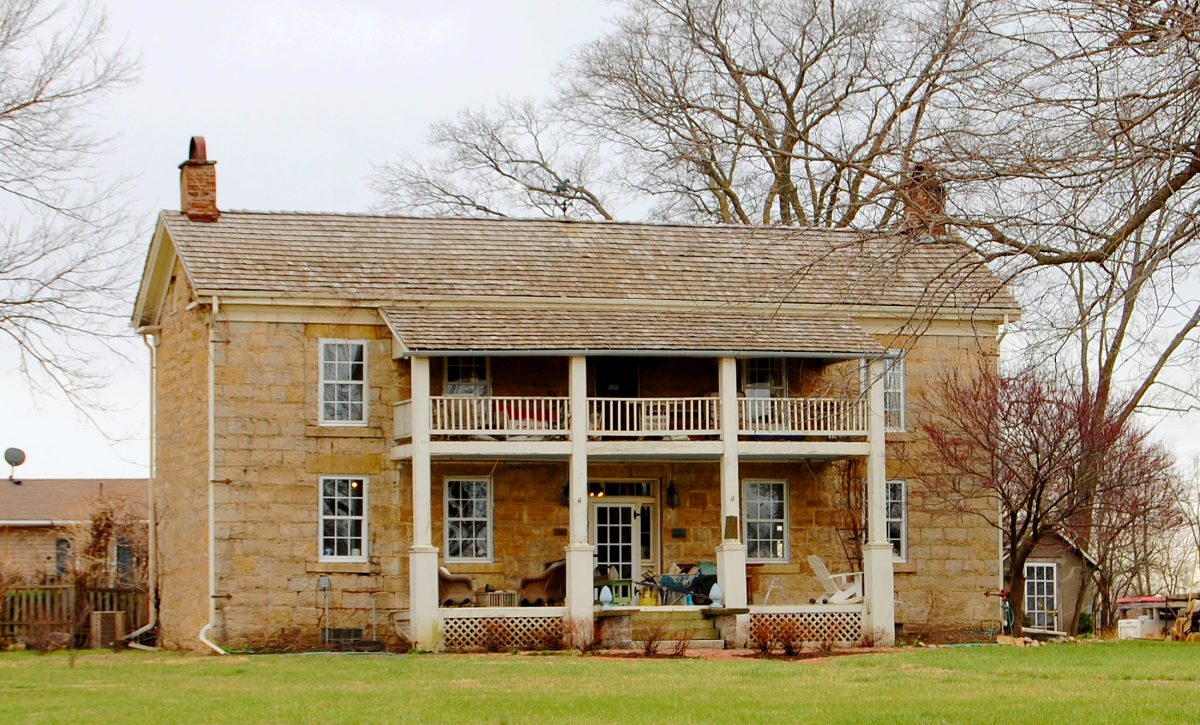