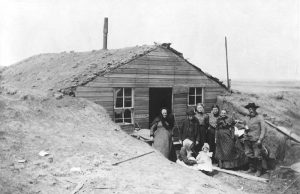 The area was first settled by the Thomas J. Vanderslice family, with four brothers who all built homes and a well there. The brothers called the settlement Bloomburg, after their Pennsylvania hometown, which was later shortened to Bloom. Situated along the Fort Dodge-Camp Supply Military Road, it soon became a stopping point for travelers and the Vanderslices kept some groceries and horse feed to supply traveler needs.

Bloom gained a post office on December 23, 1885; but, didn’t really become a settlement until the Chicago, Rock Island & Pacific Railroad came through in 1888. The railroad tracks crossed a section just a little south of the original settlement and a number of homes and businesses were moved closer to the rail line. At that time, there was a hotel, three grocery stores, and a school.

However, due to severe drought, many people began to move away and the post office closed on April 30, 1891, at which time, many of the buildings were moved or torn down. By 1893, the town was no longer active, leaving just two families left in the vicinity — the S. O. Albright family and the Oscar J. Andrews family. The post office was hauled away in the fall of 1894. By that time, business lots that had earlier sold for $1500-$2000 were allowed to go for taxes. 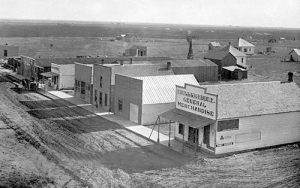 There were; however, a number of area ranchers in the area and when people began to settle there again in the early 1900s, Bloom was given a second chance. The post office reopened on August 17, 1908 and S.O. Albright, an original homesteader, opened a store. Two years later, other businesses had also been established.

At its peak, Bloom’s population was a few hundred people, at which time it had a hotel, gas station, restaurant, post office, lumber yard, a church, and schools. In the 1910s, it was described as a “prosperous town that was one of the biggest wheat shipping stations on the Rock Island, west of Hutchinson.

However, the town began to slip again in the 1930s and its population declined. The town’s school district merged with that of Minneola, Kansas in 1964. Its post office closed on March 21, 1992. 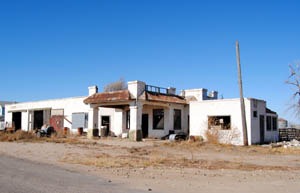 An old service station in Bloom, Kansas by Kathy Weiser-Alexander.

Today, most of the buildings are in ruins, the high school and others have fallen, and only a grain elevator business and a few private residences remain. Wheat farms and ranches surround the small town. Bloom Township has a population of about 90, but it is unknown how many people remain in this largely abandoned ghost town. 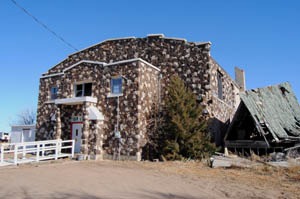 The old gymnasium in Bloom, Kansas, built by the Works Progress Administration, later served as a church, by Kathy Weiser-Alexander. 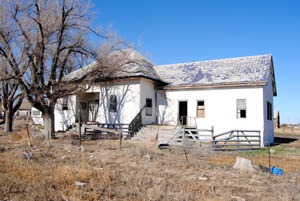 This old building in Bloom, Kansas looks like it may have been a grade school at one time, by Kathy Weiser-Alexander.