Bonita, Kansas was a small town located about five miles south of Olathe in Johnson County. It is extinct today.

The first settlement was made by Frank Temple and William Jobi, on October 17, 1879, and a post office was established in December 1879, with F. Gilbert as the first postmaster. Mr. Gilbert also opened a store in the same month on the north side of Main Street. 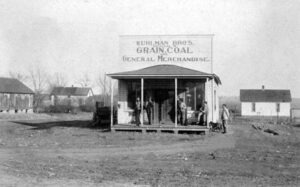 When the Kansas City, Fort Scott & Gulf Railroad, came through the station was named Alta by the railroad company because it was the highest spot on their road. However, when the post office wanted to change its name to Alta, it was denied because there was already a Kansas post office by that name. The name was changed to Bonita on January 12, 1880. Bonita, Spanish for beautiful, was an appropriate name, because of the beauty of the surrounding rolling prairie.

By 1910, it was still a tiny village with just a population of just 35. It also boasted a general store, a railroad depot, a grain elevator, and a few residences. At that time, the St. Louis & San Francisco Railroad was running through the area.

Unfortunately, the depot closed in the 1930s and the post office closed on September 15, 1934. Later the small community was bypassed by U.S. 169. However, the general store continued to operate through the 1990s.

The deteriorating old store a just a few old houses still stand at the intersection of 175th Street and Woodland Road in Olathe, Kansas. 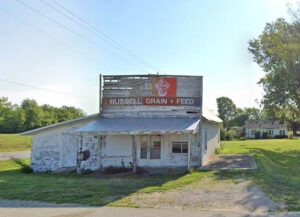