Bremen, Kansas, an unincorporated village of Marshall County, got its start when a town was laid out by Henry Brenneke in 1886. He built the first house on the southeast corner of his farm near the line of the St. Joseph & Grand Island Railroad. The town was named after a seaport in Germany near which he was born. 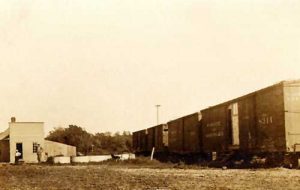 The same year he erected a store building in which he carried general merchandise and in March 1877, he established a post office with himself as postmaster. In addition, Mr. Brenneke also carried on an extensive livestock and grain business.

In March 1888, the Bremen Farmers Mutual Insurance Company was organized by a few German farmers to protect themselves against fire losses. From this very humble beginning, the organization grew to be one of the biggest and most reliable mutual insurance concerns in the
state, with agents in 13 counties, insuring farm property against fire, lightning, and tornado accidents. The company still operates today.

Carl Schultz built a blacksmith shop in 1888 and two years later, in 1890, Joseph Sedlacek built a hardware store with a spacious hall in the second story. Charles Fischer started a restaurant and lodging house soon after, and Louis Pralle built a store for general merchandise. William Raemer, from Herkimer opened a lumber yard, which he later sold to the Dursee brothers. In August 1907, the State Bank of Bremen was organized and did a flourishing business.

In August 1907, the State Bank of Bremen was organized.

During the night of March 17, 1908, the little town was entirely wiped out by fire causing a loss of more than $20,000. Though undismayed by this calamity, the good people proceeded of the community, at once began to rebuild in a more substantial manner and soon a much better town was erected. 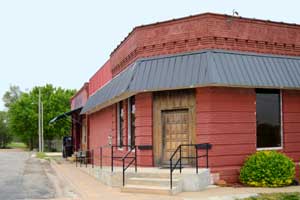 In 1910, the town boasted banking facilities, telegraph and express offices, a post office with two rural mail routes, and a population of 200 people.

In 1917, the town had several businesses including Sedlacek & Son — a hardware, furniture, and auto supply store; Rengstorft Brothers’ Hardware, Prell Merchandise Company, the Bremen State Bank, a grain elevator, a blacksmith, a lumberyard, a hotel, a telephone exchange, and the Bremen Farmers Mutual Insurance Company, which still operates today. At that time, the company had 1541 members and carried $3, 268,852 in risks. The population at that time was about 100.

Today, Breman’s population is very small, but it continues to retain a couple of businesses. 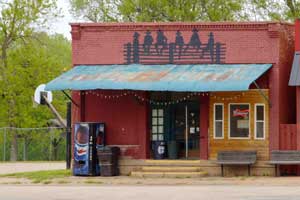 But, even before the town of Breman was established there were a number of people German Lutherans who lived in the vicinity. These folks founded the Immanuel Lutheran Church-Hermansberg on August 9, 1869, three miles northeast of Bremen, Kansas. The first sermon was conducted by Reverend G Ladgraf on June 7, 1868, in the home of Friedrich Westermann. At that time, the pastor said: “This is Hermansberg. Someday we will build a church here.”

Construction of the first church began in 1870. The stone church included two rooms in the back — one to serve as a school classroom and the other as a parsonage. It was dedicated in February 1871. However, the local congregation soon outgrew its classroom and in 1877, a school and teacherage were built.

In 1880, the Voters’ Assembly granted a peaceful release to 15 families in the northwest part of the parish. These families formed Trinity Lutheran Church-Hanover, six miles northwest of Immanuel. This was Immanuel’s first daughter congregation. 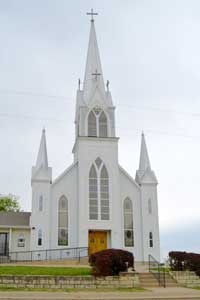 The congregation also decided to remove the east wall in the church building to increase seating capacity, which added room for to accommodate about 400 worshippers. It was also decided to construct a parsonage. In 1888, with enrollment at the school at more than 100 students, the congregation decided to build two more schools and to hire two more teachers. One school was built 4.5 miles to the northeast and the other, one mile south of Bremen, giving the congregation three schools, each with grades one through eight.

In 1891 Immanuel was probably the largest congregation in the Kansas District, listed with 626 members plus 170 children in the three schools. After a group of families in the Herkimer area requested their release to form the Zion Lutheran Church in 1892, this became Immanuel’s second daughter congregation. Still in need of larger worship space, the congregation then built two more churches, one in the North School District and another on the site of the original old stone church. The two churches were completed in 1901, with the North church becoming the Bethlehem Lutheran Church-Bremen. More than a century later, both of these church buildings continue to provide worship services.

Immanuel continued to see changes, including the arrival of electricity, the gradual change to using the English language instead of German, church renovations, and more new school buildings. In 1952 it was decided to move the South school to Hermansberg to join with the North school. Both the North and South school buildings were physically moved and placed atop a new basement which was dug northeast of the church. The basement served as a new parish hall for the congregation. In 1964 a ball field was constructed east of the church and school. 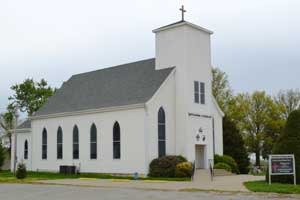 The main church is located at 570 Road, Breman, Kansas.