The old business district in Bushong, Kansas by Kathy Weiser-Alexander.

Bushong, Kansas, located in northwest Lyon County, is a ghost town with a population of only about 30 people today. 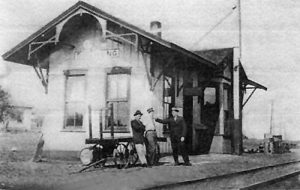 The town got its start in 1886 when the Missouri Pacific Railroad built its tracks across Northern Lyon County. After Joseph Weeks donated 20 acres of land to the railroad, a station was built called Weeks. After the railroad built on part of the acreage, it sold some of it as town lots. Though there was no town company, Joseph Weeks also platted another 20 acres and sold lots.

The Missouri Pacific Railroad also built a large tank pond one mile east of town, which supplied the steam engines with water as they pulled their trains over the hills to Council Grove. Cattle pens were constructed to hold the cattle for shipping from the large pastures in the area. The railroad also bought a valuable stone quarry south of Bushong and shipped quarried rock to Kansas City. 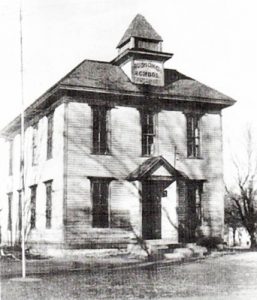 When the new settlement gained a post office on January 31, 1887, the name was changed to Bushong in honor of Al “Doc” Bushong, who was a baseball player for the St. Louis Browns. The player’s greatest success came when he was the starting catcher in the 1886 World Series when the St. Louis Browns of the American Association beat the Chicago White Stockings of the National League. Afterward, the team owner honored his players by arranging to have western towns renamed for them, and Weeks became Bushong. The city is the only one still carrying its name from the 1886 World Series.

In 1887, Bushong had a population of about 75. The first station agent was R. D. Cottrell, who also built the Bushong Hotel, which he operated with his wife for a few years. After his death, she remarried and continued to operate the hotel for a few more years. Other early businesses included a general store, a flour mill, blacksmith, lumber yard, boarding house, and a hog fence factory.

In February 1894, a diphtheria epidemic caused 12 deaths in 48 hours, and the school was closed. In 1896, the town gained its first and only doctor, Chester L. Stocks. Also a druggist, he continued to serve the community until 1934.

In 1899, the town boasted a newspaper called the Bushong Bulletin for a brief time. The same year, a Methodist church was established. It had one large room with a pot-bellied stove in the center and featured an organ.

Bushong reached its peak in 1910 with a population of 250. At that time, its post office had one rural route, and the town boasted a number of general stores, a hotel, public school, telegraph, telephone, and express service, and its railroad was providing a considerable amount of shipping. For many years trains stopped at Bushong for passengers. When passenger service was discontinued, trains could still be stopped by “flagging” to load freight or livestock.

A special election established Bushong Rural High School, and classes were held in the upper room of the grade school in 1913. Later, students were taught in other town buildings, with the first graduation taking place in 1916.

The Bushong State Bank was chartered in 1916 but failed during the Great Depression and closed in 1932. 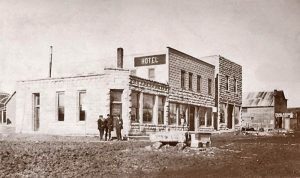 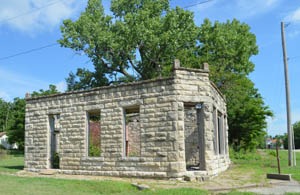 Only the stones of the bank building remain at 3rd & Main today, by Kathy Weiser-Alexander.

A new brick High School was erected in 1918 that consisted of four rooms. Later additions were made, including a gymnasium in 1926.

Unfortunately, a fire in the 1920s destroyed a large portion of the downtown area, and the buildings were never rebuilt.

In 1923 a new Methodist church building was erected on the same site as the first one. The building utilized the bell from the old church in the belfry. That year, the town’s population was 150. However, the next year, severe drought and heat caused many settlers to move from the area. 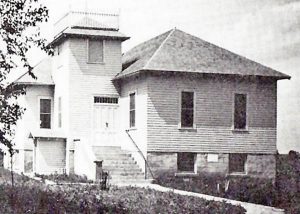 Methodist Church in Bushong, Kansas in 1923. 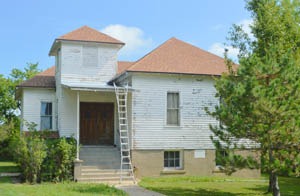 Bushong was incorporated in 1927, and L. A. Grimsley was elected as the first mayor. At that time, the town had a population of about 150 and continued to maintain its two room grade school and a four-room rural high school. The Methodist Church and Sunday School were well attended. At about that same time, electricity was approved. In 1936 Bushong voted to sell their utility to Kansas Electric Company of Emporia. Bushong’s early telephone system was part of the Farmers Mutual Telephone Association, a cooperative company that everyone helped to construct and care for lines and poles. The company was sold in 1960.

Like numerous other communities across the nation, Bushong was hit hard by the Great Depression and never recovered afterward.

In 1955, school enrollment had dropped to such a degree that Bushong consolidated with the other area schools. High school pupils went to nearby Allen until Northern Heights opened in the fall of 1957, consolidating the high schools of Bushong, Allen, Admire, and Miller. Grade school continued at Bushong until 1966 when all area 3rd and 4th graders went to Bushong and the other grades to Allen and Admire. The school finally closed in 1970, and the city purchased the building for use as a Civic Center. Currently, the building is abandoned. 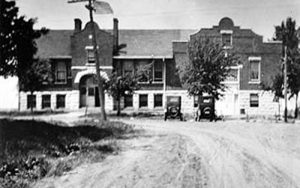 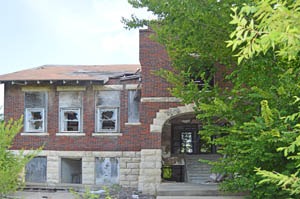 The railroad discontinued the depot in 1957, and later the depot building was torn down.

During the Cold War, Bushong was the location of one of the first generations of nuclear-tipped intercontinental ballistic missiles. One of several Atlas class missile silos developed in the midwest, active from 1961-1965, was part of the 548th Strategic Missile Squadron.

Bushong’s post office closed on July 2, 1976. Today, Bushong is called home to only about 30 people with no open businesses.

The old community. is located about 20 miles northwest of Emporia. 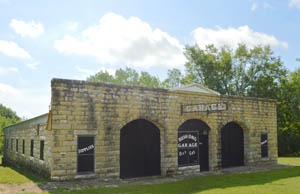