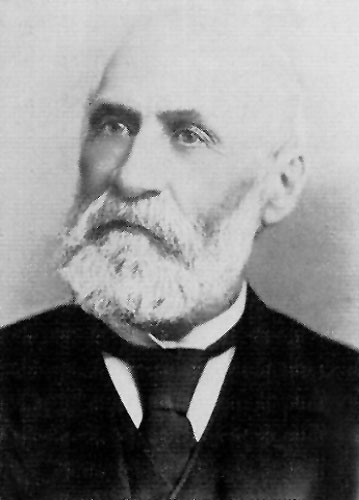 Charles Robinson was a physician and the first governor of Kansas after its admission into the Union.

Charles Lawrence Robinson was born in Hardwick, Massachusetts, on July 21, 1818. His elementary education was obtained in the local schools, and at the age of 18, he entered Amherst College, where he spent two years before an affection of the eyes compelled him to leave school. He walked 40 miles to Keene, New Hampshire, to consult a physician and, while under treatment, decided to study medicine. He began his studies at Woodstock, Vermont, and in 1843 graduated with honors at the medical school at Pittsfield, Massachusetts. Shortly after receiving his degree, he began practice at Belchertown, Massachusetts, but in 1845 moved to Springfield, where he became a partner of Dr. Josiah Holland, who later used the pseudonym of Timothy Titcomb in his writings, and who had been a classmate of Robinson’s at Pittsfield.

Here, Robinson won a widespread reputation as a specialist in treating chronic diseases. In 1847, he moved to Fitchburg, Massachusetts, where he practiced for two years. However, when gold was discovered in California in 1849, he changed his focus and set out for the Pacific Coast as a surgeon to one of the pioneer parties of gold seekers. 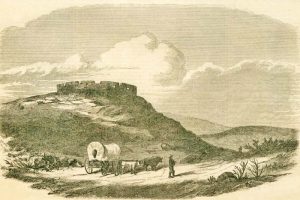 While on the overland trip, the party encamped near the present city of Lawrence, Kansas, and Dr. Robinson climbed to the summit of Mount Oread, where the University of Kansas is now located.

Upon arriving in California, he spent some time prospecting and mining, after which he opened an eating house in Sacramento. While there, he became involved in a controversy between the squatters, who held lands under the United States pre-emption laws, and speculators who claimed the title by purchase from Captain Sutter, who held some 99,000 acres under a Mexican-Spanish grant. A love of fair play seems to have been an inherent trait of Dr. Robinson’s nature, and he supported the cause of the squatters, with whom he soon became one of their most trusted advisers and leaders. 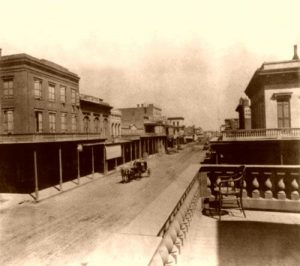 Sacramento, California by Lawrence and Houseworth, 1866

Several conflicts between the two factions ensued, in one of which the mayor of Sacramento was killed, and Dr. Robinson was seriously wounded. Before he recovered, he was indicted for conspiracy, assault with intent to kill, and murder, and for ten weeks was confined on board a prison ship, at the end of which time he was tried and acquitted. While a prisoner awaiting trial, he was elected to the California Legislature, where he supported General John Charles Fremont, who was elected as a United States Senator. For a time, Robinson published a “free-soil” paper at Sacramento, but on about July 1, 1851, he started via the Panama Canal for Massachusetts.

The vessel on which he embarked was wrecked off the Mexican coast, and he shipped as a surgeon on a vessel from Panama to Cuba, carrying several sick men who had been employed in the construction of the Panama Railroad. On September 9, 1851, he arrived at Fitchburg and immediately resumed his medical practice. On October 30, 1851, he married Sara T.D. Lawrence. 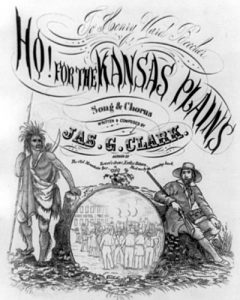 Ho for the Kansas Plains

In addition to his practice of medicine, Dr. Robinson assumed the editorship of the Fitchburg News at about the same time as the attention of the country was attracted to Kansas and its struggles. He wrote and published several letters concerning the region, which aroused widespread interest.

Immediately following the passage of the Kansas-Nebraska Act, Emigrant Aid Societies were organized in the East to assist those who might desire to seek their fortunes in the “Far West.”

At a meeting in Chapman’s Hall in Boston, Eli Thayer delivered an address, and at the close, inquired if anyone present was willing to go to Kansas. Dr. Robinson promptly walked up and signed up, and on June 28, 1854, left Fitchburg for Kansas. On September 6, he and his young wife reached the foot of Mount Oread in Lawrence, Kansas, and here, they established their home. He soon became active in locating more emigrants sent out by the Aid Society and was recognized as a leader by the Free-State men.

His home was destroyed in the Sacking of Lawrence in May 1856, suffered calumny and imprisonment, and was otherwise persecuted based on his opinions. Douglass Brewerton, a correspondent of the New York Herald, wrote of Dr. Robinson in 1856 as follows:

“He may be regarded as the real head — the thinking one we mean — and the mainspring of the Free-State Party; or, to speak more correctly, of all that party who are worth anything. We believe him to be a keen, shrewd, far-seeing man who would permit nothing to stand in the way of the end he desired to gain. He is, moreover, cool and determined and appears to be endowed with immense firmness; we should call him a conservative man now, but conservative rather from policy than principle. He seems to have strong common sense but no brilliancy of talent. In fact, to sum Governor Robinson up in a single sentence, we consider him the most dangerous enemy which the pro-slavery party has to encounter in Kansas.” 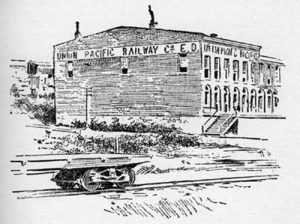 The Wyandotte Constitution meetings were held in the Union Pacific Railway building in Kansas City, Kansas.

Dr. Robinson was elected the first governor under the Topeka Constitution, and he was the first commander of the Free-State Militia. The Wyandotte Constitution was ratified by a vote of the people on October 4, 1859. On December 6, he was elected governor, though he did not assume the duties of the office until after the admission of the state in 1861, just two months before the outbreak of the Civil War.

During the Civil War, Robinson was preoccupied with wartime concerns, especially those of his chief rival, the volatile and flamboyant James H. Lane. This bitter rivalry culminated in impeachment proceedings against the governor, Secretary of State J.W. Robinson, and State Auditor George S. Hillyer. Robinson ultimately was acquitted of all charges, but the other two executive officers were convicted and removed from office. Despite these political difficulties, one early biographer heralded Robinson:

“as the strongest character in the history of the State… Under his leadership, the battle was won for the North, Kansas entered the Union a Free-State, and the prestige of the South was crushed and broken forever.”

He had his enemies and critics but was later recognized by Kansas historians that his virtues far outweighed his faults. Upon retiring from the governor’s office, Dr. Robinson also retired from public life. Until his death at age 76 on August 17, 1894, Charles Robinson remained an active and influential force in Kansas affairs. Upon his death, he was buried at Oak Hill Cemetery in Lawrence. Taking a keen interest in education, Robinson Hall, one of the buildings of the University of Kansas, was donated by his estate and named in his honor.

“His greatest achievement ay in his moderate and persevering work toward quelling violence in Kansas and making it a free state.”

Compiled and edited by  Kathy Alexander/Legends of Kansas, updated March 2022.