The Chicago, Kansas, and Western Railroad (CK&W) was formed by combining the charters of ten smaller railroads on May 31, 1886.

At this time, the Atchison, Topeka & Santa Fe Railroad and the Missouri Pacific Railroad were in stiff competition to build lines in new territory. While this competition was going on, the Chicago, Kansas, and Western Railroad was busy building many disconnected lines all over Kansas and then leased them to one of the two competitors.

In some cases, this railroad had competitors who were playing the same game and racing to get to certain destinations. All through 1886, construction crews for the CK&W and the Denver, Memphis & Atlantic Railroad, a Missouri Pacific subsidiary, raced one another westward through Chautauqua County, each vying to beat the other to the Cowley County line. When the CK&W failed to reach Cedar Vale and the county line first, the company had little reason to share the same territory with the Missouri Pacific Railroad and quit building. After the line was operated by the Santa Fe Railroad as the Cedar Vale branch, with most of the traffic coming from the cattle town of Elgin, Kansas near the Oklahoma state line. 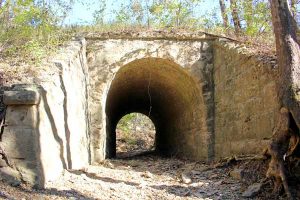 The Chicago, Kansas, and Western Railroad continued until it was sold to the Atchison, Topeka & Santa Fe Railway in April 1901.

An old stone arch bridge continues to stand over a branch of the Caney River along road 11 near Elgin, Kansas in Chautauqua County.