Claflin, Kansas, located in northeast Barton County, got its start when the Missouri Pacific Railroad made plans to come through the area. 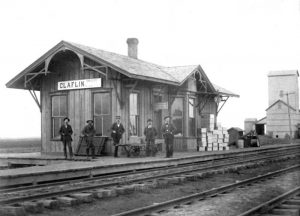 By the spring of 1887, the railroad tracks were laid, and a depot was built on the south side of the tracks. The station was called Giles City after Stelle Giles, who lived nearby. A town company was organized which also planned to build south of the tracks; however, W.A. Giles, who owned the land, would not sell the 40 acres that the company wanted. The company decided to build north of the tracks and purchased land from J. H. Williamson. Judge O.P. Hamilton surveyed the site and laid out the town in a cornfield. The city was named after Judge Hamilton’s wife, whose maiden name was Claflin. The Claflin Town Company, with Stelle Giles as President, filed the townsite with the Barton County Register of Deeds on March 31, 1887. 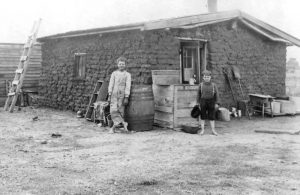 The first business building was erected by J.H. Cannon, who opened a general merchandise store and a bank in the same building. The first school was also held in this building. Soon the railroad was unloading building material for the S.H. Chatten Lumber Co. and coal for the community. J.H. Williamson erected the first hotel, which held the post office when it opened on May 27, 1887. E.J. Ingersoll built a livery and feed barn and the Elmore Brothers put in the first stock of hardware and implements.

George Norris had a furniture store and later became Claflin’s first undertaker. Some of the other businesses that followed were a cafe built and operated by Cas Dermitt, an elevator built by a Mr. Graham and operated by A. A. German that was powered by a blind horse, and Charles Bucker operated a general blacksmith shop. The Claflin Clarion, published by Charles Vert, began operation in 1888. 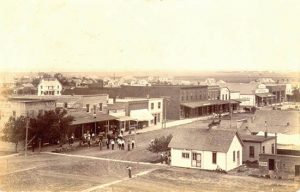 A schoolhouse for District 80 was erected in 1889, and the Farmers and Merchants State Bank was organized in about 1892.

In the early days, the Methodist and Christian churches were built, and later, the German Lutheran was erected.

The city was incorporated in 1901, and H.E. Hill became the first mayor.

In 1903, Miller’s of Claflin was founded by J.W. Miller. Initially, the store carried furniture, buggies, hardware, implements, and even windmills. A large store building was erected on Main Street in 1915. While many locally-owned, family-owned, independent furniture stores began to be replaced by regional and national chains in the next century, Miller’s continued to enjoy success and growth. More than 110 years later, the store is still family-owned and has grown with five showrooms to the south of the main store. Today, it is the largest furniture showroom in central Kansas, exceeding 100,000 square feet.

In October 1903, the Catholic Immaculate Conception Church began to be built. Built at the cost of $4,000.00, services began in August 1904. Soon the Parish purchased the southwest corner of the Claflin Community cemetery to be the Catholic Cemetery for $100.00.

In 1910, Claflin reported a population of 554 and had two banks, two hardware stores, two hotels, three lumber yards, five grain elevators, two mills, a creamery, a machine shop, a weekly newspaper called the Clarion, Catholic and Protestant churches, and a good public school system. At that time, it was a principal shipping and supply point for a large agricultural district.

A new public school building was built in 1911 for $17,000, replacing the earlier prior school that was much smaller.

Work began in July 1918 for the Immaculate Conception Catholic Parochial School. The school was ready for occupancy by October 15 of that same year.

In 1938, the City of Claflin began to modernize the town, and a sewer system was installed.

By 1948, the parishioners had outgrown the existing Catholic church and construction began on a new building the next year. The new church of the Immaculate Conception was built in a Romanesque style of red brick, was dedicated in October 1949. The church still serves a congregation today. 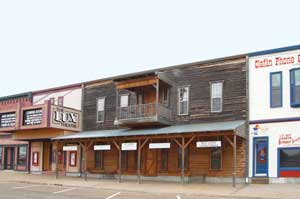 Claflin remained a small town through the years, with its population peaking at 921 people in 1950.

The Immaculate Conception parochial school was closed in May 1970, due to increased costs, lack of teachers, and requirements by the Department of Education in Topeka.

Today, Claflin is called home to about 600 residents. This proud small community continues to maintain its historic buildings in a colorful manner, displaying many of their original usages. False front buildings line Main Street advertising the electric and telephone companies, a livery, meat market, merchandise store, and more. Many of these buildings continue to be utilized by Miller’s Furniture Store as additional showrooms. Photo opportunities abound.

Claflin is located about 20 miles northeast of Great Bend.