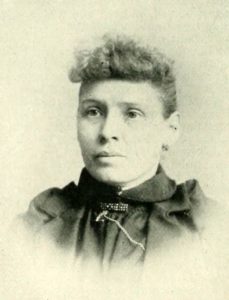 Clara H. Epsy Hazelrigg was a teacher, author, and evangelist who made an impact in early-day Kansas.

Clara was born at Council Grove, Kansas on November 23, 1859, to Colonel H. J. Espy, Melora E. Cook Espy. When Clara’s mother died in 1861, she was taken to Indiana but returned in 1866. Just two years later, her father died and she was again sent to Indiana where she attended school.

When she was just 14 years old, she began teaching in a private school and later in the public schools of Ripley County, Indiana.  On December 27, 1877, she was married to W. A. Hazelrigg of Greensburg, Indiana, and in 1883 they moved to Kansas settling in Butler County, where she resumed her work as a teacher. She attended business college at Emporia and was elected superintendent of the Butler County schools.

In 1895 she published a History of Kansas, which shows evidence of considerable research and literary ability. This is her best-known literary work. Later, the family moved to Topeka, but their vacations are spent upon Mr. Hazelrigg’s ranch in New Mexico. In addition to her teaching, she also devoted much time to church work and won a wide reputation as an evangelist.