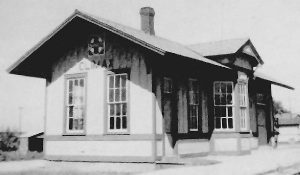 Climax, Kansas, located in southcentral Greenwood County, started when a community began to grow around the Banner School, which was earlier established at the site of the present town.

In June 1870, a post office was established in BelleGrove, Kansas, several miles to the west of Climax. It was moved to the new settlement and renamed Climax on February 6, 1872. However, the community must have grown very slowly, as the post office was closed in May 1880.

However, when the Atchison, Topeka & Santa Fe Railroad came to town, it was reopened within just a couple of months in September 1880. The town was officially platted in 1884.

By 1910, Climax was described as having good churches and schools, and several leading lines of business activity were represented. Its population at that time was about 100 people. 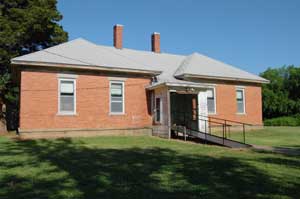 In the 1920s, Climax began to decline as the railroad faced competition from automobiles. However, the small community hung on, and in 1940, its population peaked at 157. By 1945, it boasted two general stores, a hardware store, a blacksmith’s shop, two filling stations, a creamery, and a barbershop, where men could get their haircut for just  25¢. It also sported a grade school, high school, and three churches. At that time, its railroad still provided two trains per day. However, by December 1948, only one train arrived in the community each day.

With other Greenwood County cities growing, Climax once again began to decline. Its high school closed in 1957, and its grade school closed in 1969. In the 1970s, the Santa Fe Emporia-Moline railroad branch that passed through Climax was taken out of service and removed. The town’s post office closed on January 7, 1989. 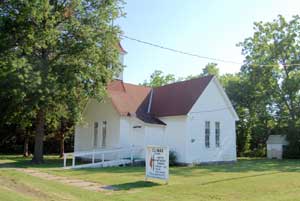 Today, Climax is home to just about 65 people, and there are no open businesses. However, a church still provides services, and the town continues to support a Masonic Lodge. It is located about ten miles southeast of Eureka, Kansas.