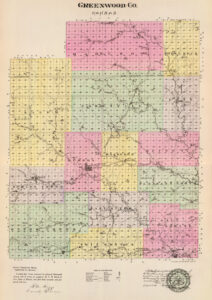 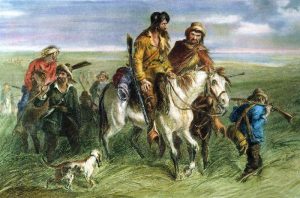 Greenwood County, Kansas, located in the southeast portion of the state as one of the original 36 counties created by the territorial legislature in 1855. As of the 2020 census, the county population was 6,016. Its county seat and the most populous city is Eureka.

Nestled in the rolling Flint Hills of the Tallgrass Prairie, the county was named for Alfred B. Greenwood, the Commissioner of Indian Affairs and a United States Land Commissioner under Presidents Pierce and Buchanan. When the county was initially created, it was nearly a square tract of uniform size, similar to surrounding counties. However, in 1861, Madison County, which the Territorial Legislature had also created, was divided between Breckenridge (now Lyon) and Greenwood Counties, and Madison County was eliminated. It was an unorganized territory for several years until 1862, when the county was officially organized. 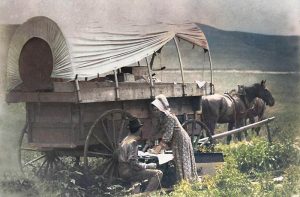 In the next two or three years, the county’s growth in population was rapid, but most of the settlers were poor people who had come to the new country to better their conditions. Money was an unknown quantity, and just as they began to realize a little income from their holdings, the drought of 1860 reduced them to near starvation. Supplies could only be obtained in Atchison and had to be brought 160 miles by teams. Storms and exceedingly cold weather, together with the feeble condition of the wagon teams from scanty rations, made it almost impossible to get food to the settlers and their animals. Most of the stock died, and the following spring found the settlers without animals to put in their crops. However, those who overcame this difficulty raised a good crop in 1861.

When the Civil War broke out, most pro-slavery people, who had not already left due to the prior year’s drought, soon drifted away, as Kansas had declared herself to be a “Free State.”

However, during the Civil War, Greenwood County would become the scene of violence as its residents, divided against themselves, sacked and burned villages. At the same, the residents were exposed to the attacks of hostile Indians and those who sought, in the troubled times, an excuse for indiscriminate pillage. As a result, a rough fort was built at Eureka in 1861 and named in honor of Colonel James Montgomery of the Tenth Infantry. It was built by the home guard under Captain L. Bemis and was occupied by them during their entire term of service.

Though the county was in the midst of violence, it did not stop its residents from officially organizing in March 1862. The first meeting was held at Janesville, the temporary county seat, and the county was divided into townships, and county officers were appointed. After the appointment of county officers, the first regular election was held in November 1862.

The end of the Civil War did not end outlawry in the county, as was evidenced by the assassination of William and Jacob Bledsoe, who had been arrested on the pretext of horse stealing in April 1865. One night they were removed from one impromptu guardhouse to another, but en route, they were assassinated.

The story of their guards, John Taylor, William Brown, and Thomas Craig, was that an attack was made by Indians who had suffered the loss of ponies, and the prisoners were let go. However, the authorities did not take this view of the case, and after a weary length of time, Brown was convicted, and Craig was acquitted. Taylor was never apprehended and was later reported to be dead. 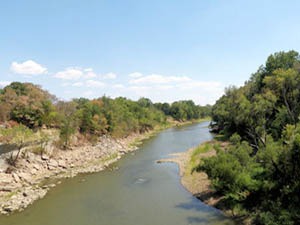 The following year, a man named Robert Clark was also brutally murdered by a man named G.W. Petty in his cabin on the Verdigris River. During the Civil War, G.W. Petty was a bushwhacker, though he was connected with neither side and worked for individual profit only. After the war, he was reputed to have continued a lawless life. Sometime before 1866, he had lost his wife, whom he was very fond of and upon whose grave he placed an expensive monument. This monument was discovered in May 1866, so brutally defaced as to be ruined.

Petty suspected Clark and decided to kill him. The same month, as Clark was sitting with his wife and children in his cabin on the Verdigris River, a man rode up to the door and asked for directions. Still sitting in his chair but bending out of the door, Clark provided the requested information when another man riding past the window shot Clark, who fell to the floor but staggered up again and tried to reach his gun. As he fell a second time, three men rode up to the window, where they remained motionless until Clark died. When they appeared, Mrs. Clark recognized Petty and cried out: “For God’s sake, Wash Petty, don’t kill me and my children; you have killed my husband!”

No answer was given, and, seeing Clark dead, the men rode off. An indictment was found against Petty in 1870, and he was arrested; and after many delays, he was found guilty and sent to the State Penitentiary in May 1879. 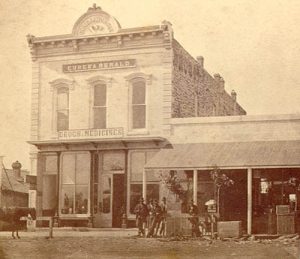 In the meantime, another settlement was growing — Eureka, and in 1866, the voters moved the county seat to the quickly thriving community.

Since the county’s beginning, there was a strip of territory about ten miles in width along the southern part of the county that had belonged to the Osage Indians. The reservation was a strip measuring 20 by 70 miles situated in Greenwood County and in Elk, Wilson, and Butler Counties. In 1870, settlers demanded more land, and this property was placed in trust with the United States to be disposed of for the Indians who were removed to Indian Territory (Oklahoma.) The land was then made available for homesteading for $1.25 per acre. Before long, many of the best farms in the county were located in this tract near the towns of Gould and Severy.

In 1871, the county submitted a vote of bonds to build a new courthouse. After the vote passed, the three-story building began with limestone bricks quarried about 1 ½ mile west of town. The building served the county for several years, but, unfortunately, in the second half of the 20th century, it had to be replaced by a more modern building. 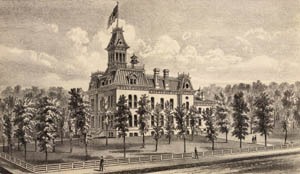 In 1874, a third murder occurred in the county when O. C. Crookham was shot by Alexander Harman while gathering corn in his field. The circumstances which led to the shooting were, briefly, certain mortgages held by Crookham and the settlement of a claim of Harman for some prairie-breaking. Harman, who appears to have been hardly sane, walked coolly up to Crookham, placed a pistol to his neck, and shot him. Crookham died two days later, and Harman, after due process, was found guilty and taken to the penitentiary. However, his conduct was so violent; that he was later removed to the Asylum.

Railroad negotiations began as early as 1870, and several bond elections were held over the next decade for various railroads. However, it would be several years before a railroad would reach the county, the first of which was the Atchison, Topeka & Santa Fe Railroad (at that time, the Kansas City, Emporia, and Southern) in 1879. The next was the St. Louis and San Francisco Railroad, built in 1880, and Missouri Pacific Railroad established its line in June 1882.

In 1910, of the 739,000 acres of land in Greenwood County, 525,000 were under cultivation. The total yearly income from farm crops exceeded five million dollars. Livestock was nearly three million. Kafir corn, wheat, oats, Irish potatoes, and poultry were other important products. The assessed valuation of property that year was nearly $34,000,000. At that time, the population was 16,060, making an average wealth of more than $2,000 per capita. 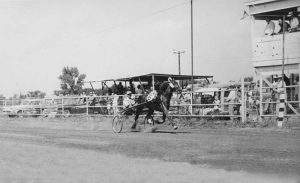 Throughout the area, can be seen several ghost towns, which died when railroads were removed or after the decline of oil production. Several historic buildings can also be seen, especially in Eureka and Madison. Other historical places in Greenwood County include a three-arch stone bridge four miles north and one mile west of the Piedmont turnoff from Highway 96, the Eureka Carnegie Library at 520 N. Main, and the historic Number Eight School House, located just east of Madison.

In Eureka, the old Greenwood Hotel has been restored to its former glory and is available today for special events. There are several festivals and events throughout the year. Both residents and visitors enjoy fishing at the Fall River Reservoir and Toronto Lake. For an in-depth view of Greenwood County history, visitors can learn more at the Greenwood County Historical Museum in Eureka. 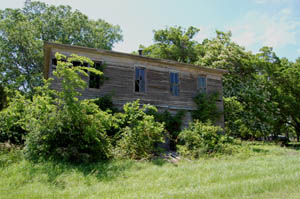