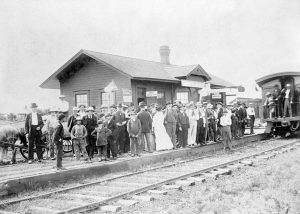 The area between Willow and Slate Creeks was first settled in 1870 and was called Fullerton. However, when it received a post office on December 3, 1875, another town had already claimed that name, so it was called Hamilton in honor of Alexander Hamilton, the first Secretary of the Treasury.

In 1910, the town boasted all lines of mercantile enterprises were represented, including banking facilities, a weekly newspaper called The Times, telegraph and express offices, and a money order post office with one rural route. By this time, it had grown to some 325 people. Situated on the Atchison, Topeka & Santa Fe Railroad, Hamilton became an important shipping point for the products of a productive agricultural country. At that time, the Hamilton stockyard was the largest one from Emporia to Howard City and it had the ability to handle 800 head of cattle per shipment. 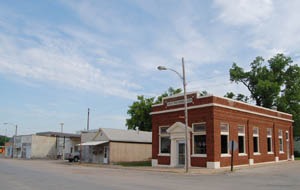 Hamilton’s population peaked in 1930 at 549 and afterward began to gradually decline. Throughout the decades, Hamilton prospered from both agriculture and oil; however, it always remained a small town. One remaining feature of this small town is Holmes Sundry at 101 E. Main Street which has been doing business for years. Though this building looks like a drug store, and probably at one time it was, it no longer fills prescriptions today. However, it does retain an old 1920s soda fountain with a marble base, six stools, and its original syrup pumps and water spigots. Here, visitors can get an old-fashioned soda, ice cream, and even a daily meal special.

Today, Hamilton is called home to about 242 people. It is located about 15 miles northeast of Eureka, the county seat. 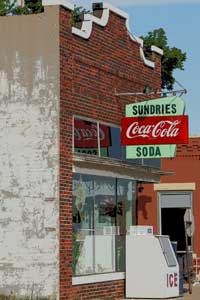