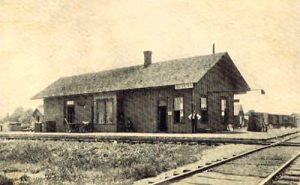 Severy, Kansas, located in south-central Greenwood County, was first called Gould when it was established on Salt Creek.

When the Atchison, Topeka & Santa Fe Railroad was built in 1879, the small community moved north to the railroad. The town was laid out by the Arkansas Valley Town Company in January, and by April it had sufficient population to become incorporated. The first mayor was E. Ellingson. The town was named in honor of Luther Severy, a railroad employee

The first building on the townsite was the combination store and residence of R. Dodds. The next was the blacksmith shop of A.R. Tomlinson. The first general store was built and opened by E. Ellingson. Other early businessmen were W.M. Stewart, liveryman; N.S. McDonald, physician; and H.C. Reece, an attorney. The Commercial House Hotel was built in old Severy by a Mr. Lindsay, and removed to the present location on the building of the new town. The Pacific Hotel was opened in 1880 by Weir & Whittenhall. A Union Sabbath school was organized soon after the organization of the town. 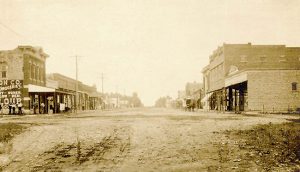 In January 1882, the town received a severe blow when it was hit by a virulent form of small-pox. This dreaded disease broke out in one of the hotels and spread rapidly. By March it had run its course and disappeared, but many vacant places told the story of its work. One of those places vacated was the Pacific Hotel.

The original Gould post office was moved to Severy on June 25, 1882, and the postmaster was R. Dodds. That year a four-room school was built at a cost of $4,000 and was opened on October 1 with an attendance of 150 students.

By 1880 the town now had a population of 306 and its businesses included seven general stores, two hardware stores, two drug stores, two hotels, a furniture store, a lumberyard, a harness shop, a meat market, and two livery stables. The Severy Pioneer Republican weekly newspaper was started in March 1880 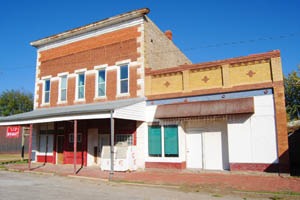 The Congregational Church began to built in 1880 and was finished the next year at a cost of $1,600. The Cumberland Presbyterian Church was organized in the country, about three miles from Severy, and held services in a schoolhouse until its removal to the town in 1881.

In 1910, Severy had become an important shipping point for livestock, grain, hay, and produce and ll lines of mercantile businesses were represented. It had two banks, a weekly newspaper called the Severyite, churches, schools, express and telegraph offices, and an international money order postoffice with three rural routes. That year, the town’s population peaked at 608.

In the next years, the population of Severy gradually declined and its schools closed in school unification. Today, the City of Severy is unique in the fact that the community has the ability to choose where to send their children to school, with a choice of Eureka or Howard.

Today, the town’s population is about 230. 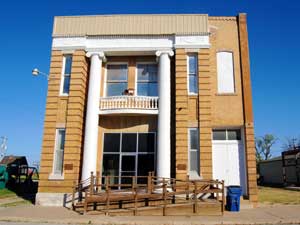 Severy is located 16 miles southeast of Eureka, the county seat.