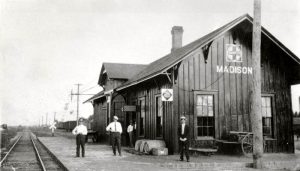 Madison, Kansas was first established on the Verdigris River in 1872, northwest of the present-day town. A man named E. Smith opened a general merchandise store to provide supplies for settlers in the area. Before long, four more men by the names of Green, Strails, Crinkle, and Oglesby erected log buildings, some of which also served as merchandise stores. The Madison Grist-Mill was built in 1878. Unfortunately, the space on which these buildings were located was too narrow for a very extended village. When the Atchison, Topeka & Santa Fe Railroad was built in 1879, the town was moved downriver to the present site.

That same year, the townsite was laid out by the Madison Town Company. The stores which had been in use in the old town were removed to the new, and Green, Cunkle, and Oglesby continued their respective businesses. The post office was also moved, retaining T. A. McClure as postmaster. 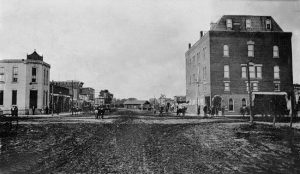 A schoolhouse was built at the cost of $1,100, and E. Walters was the first teacher. The first building on the new townsite was the residence of W. H. Green. Soon, professional people came in, new business enterprises were established. The first church, the Methodist Episcopal, was organized by Reverend H. P. Baker before the founding of the town. The first newspaper, the Madison News, was established in 1879 by W. O. Lundsford. In 1880, the Strong House was built at a cost of $3,000 and was described as one of the best country hotels in Kansas.

By 1881, the population had grown to 300 people, and the town boasted two drug stores, two hardware stores, two general stores, three groceries, a restaurant, a harness and show-shop, a millinery store, a meat market, carpenter-shop, hotel, and a grist-mill. In addition, a number of substantial residences had been built and more were in progress. That same year, the gristmill was also moved to the new location, turning out 160 barrels of flour every 24 hours. Physicians were plentiful in the new town — Drs. L. J. & I. W. Cunkle and A. Stanly having put up their shingles. 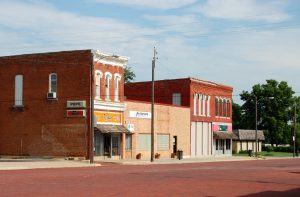 By 1910, the Missouri Pacific Railroad was also making its way through the town and was the only important shipping and receiving station for many miles around. At that time, it boasted 721 people, several mercantile establishments, two banks, a weekly newspaper called the Spirit, express and telegraph offices, and an international money order post office with five rural routes. It also had excellent schools and all the leading denominations of churches were represented.

Already a bustling cattle and farm trade center, in 1921 the town boomed with the discovery of oil. The population soared, so much so that it created a housing shortage. The number of retail businesses multiplied to accommodate the feverish growth of the oil field economy.

Today, agriculture and oil still predominate Madison’s economic base. It has good K-12 schools, a new community center, a public library, and a swimming pool. It is called home to about 620 people. The 114 acre Madison Lake, located only one and one-half miles south of Madison, offers excellent fishing, with camping facilities and electric hookups. 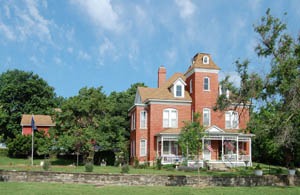 A beautiful home in Madison, Kansas by Kathy Weiser-Alexander.

Madison is located about 27 miles northeast of Eureka, the Greenwood County seat.