The Flint Hills, historically known as Bluestem Pastures or Blue Stem Hills, is a region in eastern Kansas and north-central Oklahoma. It was named for the abundant flint eroded from the bedrock near or at the surface.

This band of hills extends from Marshall and Washington Counties in the north to Cowley County, Kansas, and Kay and Osage Counties in Oklahoma, to Geary and Shawnee Counties west to east. In Oklahoma, the formation is often referred to as the Osage Hills. In east-central Kansas, the Flint Hills encompasses about 20- 25% of the state. 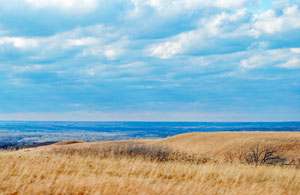 The Flint Hills are a distinct region because it has the most densely covered intact tallgrass prairie in North America. Due to its rocky soil, the early settlers were unable to plow the area, resulting in the prevalence of cattle ranches instead of the cropland more typical of the Great Plains. This temperate grassland is marked by few trees but abundant forbs and grasses that can grow up to 10 feet tall.

Human activity in the Kansas Flint Hills can be traced back about 12,000 years, when people used the area’s natural resources to hunt large mammals and gather wild plants. Trade networks extended well beyond the Plains. About 2,200 years ago, began the use of domesticated plants, produce ceramics, and hunted with bow and arrow. By about 1,000 A.D., domesticated plants and associated artifacts reflect a predominantly horticultural existence shifting to settled village life. By 1,500 A.D., more farming occurred, combined with increased bison hunting, due to the acquisition of the horse by Native Americans. In Kansas, these tribes included the Wichita, Kanza, Osage, and Pawnee.

These native peoples grew crops and lived in semi-permanent homes along streams and creeks. The Flint Hills were a communal hunting ground for the tribes, who knew that the area was good grazing ground for bison. The Flint Hills also provided much-needed chert or “flint” that they used to make tools, weapons, arrowheads, and ceremonial pieces.

By the time of contact with European explorers in the mid-1500s, the tribes had already established flourishing grassland cultures. They had become quite familiar with the tallgrass prairie and the ways necessary to succeed on it. Many of these adaptations would influence incoming American settlers.

Early tallgrass prairie explorers encountered what was to them a unique and intimidating landscape.

Spaniard Francisco Vasquez de Coronado was one of the first Europeans to come to central Kansas in the middle 1500s. However, after not finding large cities of gold and other riches, he and his group returned southwest. However, Spanish explorers and colonists brought cattle, horses, and the cattle culture to North America in the 1500s. 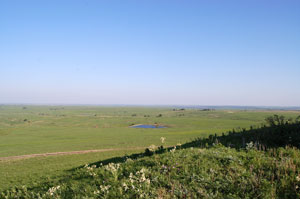 American explorer Zebulon Pike inadvertently coined the term “Flint Hills.” Passing through the area in September 1806, he made this journal observation:

When Euro-American settlers arrived in the 1850s, they struggled to farm the land because of the overabundance of rock in the soil. Observing the healthy bison on the land, they began to herd cattle, which like the bison, fattened quite quickly on the rich prairie grasses. The settlers began building cattle ranches in the Flint Hills in the 1870s. With cattle driven up from Texas and the introduction of barbed wire, ranching boomed into a huge business, setting the foundations for present-day Flint Hills cattle culture.

At one point, 150 million acres of tallgrass prairie stretched from Texas to Canada. The majority transformed into the agricultural heartland of America through 200 years of settlement and development. American settlers carved up the tallgrass of Illinois, Iowa, Nebraska, Minnesota, North Dakota, and South Dakota. Their harvests fed a growing nation and world. But, the Flint Hills would follow a different path. Never having been plowed over and remaining sparsely developed to this day, the Flint Hills represent the nation’s last expanse of intact tallgrass prairie.

Today, only four percent of the original tallgrass prairie ecosystem survives, the largest piece being in the Flint Hills. 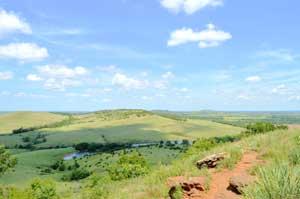 Tallgrass prairie is regularly renewed by fire and grazing, which keeps back the growth of trees and shrubs.

Cattle ranching remains the backbone of the Flint Hills economy.

Four tallgrass prairie preserves are located in the Flint Hills. The largest of these, the Tallgrass Prairie Preserve, in the Osage Hills near Pawhuska, Oklahoma, boasts a large population of bison and is an important refuge for other wildlife such as the greater prairie chicken. The other preserves, all located in Kansas, are the 17-square-mile Tallgrass Prairie National Preserve in northern Chase County, Kansas near Strong City, the Flint Hills Tallgrass Prairie Preserve east of Cassoday, and the Konza Prairie, which is managed as a tallgrass prairie biological research station by Kansas State University and is located near Manhattan, Kansas.

The Flint Hills Scenic Byway passes through the region in Kansas.

Compiled by  Kathy Alexander/Legends of Kansas, updated May 2022. 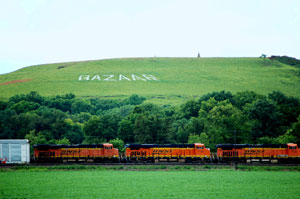