Arch bridge over the Cottonwood river near Strong City, Kansas by Kathy Alexander. 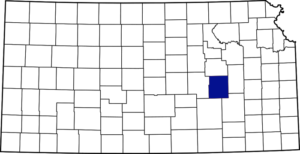 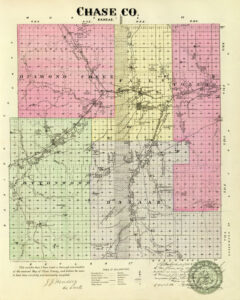 Chase County, Kansas, located in the east-central part of the state, was organized in 1859. It was named for Salmon P. Chase, the chief justice of the United States Supreme Court. As of the 2020 census, the county population was 2,572. Its county seat and the most populous city is Cottonwood Falls.

It is located 50 miles south of the Kansas River and 100 miles west of Missouri. It is bounded on the north by Morris County, on the east by Lyon and Greenwood, on the south by Greenwood and Butler, and on the west by Marion County.

The county’s terrain is somewhat broken and hilly, especially in the southern portion, while in the north, are gently rolling slopes. In some places along the streams, the slopes terminate in abrupt bluffs. The Cottonwood River is the principal stream and, with its numerous tributaries, forms the water system of the county. It enters the county from the west about 12 miles from the southern line, flows northeast to Cottonwood Falls, and then east into Lyon County. Some important creeks are Diamond, Fox, and Middle Creeks on the north, and Fork and Cedar on the south. When the county was organized, the river bottoms averaged over two miles in width, those on the creeks three-fourths of a mile, and comprised about one-eighth of the total area. The timber belts along the streams averaged less than half a mile in width and contained walnut, cottonwood, burr-oak, sycamore, ash, hickory, hackberry, box-elder, redbud, and buckeye trees. Limestone was of excellent quality, and material for building brick was abundant.

Before European settlement, Native Americans traveling across the Flint Hills established trails throughout Chase County. These trails were easy to navigate and had access to water. One trail along the Cottonwood River became known as the Kaw Indian Hunting Trail. The Kaw, also called Kanza, traveled southwest along the Cottonwood River to reach their hunting grounds in western Kansas. Pioneers later used these same trails between Council Grove and Florence.

In 1806, Zebulon Pike led the Pike Expedition westward from St. Louis, Missouri, during which time they followed the Cottonwood River through Chase County.

The earliest settlement was made in 1854, when Seth Hays, an Indian trader at Council Grove, located a cattle ranch on the Cottonwood River near the mouth of Diamond Spring Creek. Two years later, Nathan Corey, Daniel Holsinger, and Gabriel Jacobs settled in the eastern part of the county. Among those who came in 1857 were: Dr. M. R. Leonard, B. McCabe, J. Lane, M. Coyne, A. Howell, C. T. Hegwer, William Osmer, William Dixon, Walter Watson, A. B. Wentworth, Milton Ford, James Fisher, and several families from Illinois.

The first assessment was made in 1859, and the total valuation of property was $71,536. Lodges, churches, and societies of different kinds were organized early in the county’s history.

There were 549 people in the county when it was organized by an act of the legislature in 1859. It was formed out of territory taken from Butler and Morris Counties. Initially, three townships were formed — Falls, Bazaar, and Cottonwood — and voting places were designated. The first election was held on March 26 and resulted as follows: M. R. Leonard, probate judge; A. W. Smith, sheriff; Sidney A. Breese, register of deeds; R. C. Farnsworth, superintendent of public instruction; J. F. R. Leonard, surveyor; J. W. Hawkins, coroner; C. S. Hill, clerk of the board of supervisors; Samuel N. Wood, Augustus Howell, and Barnard McCabe, supervisors.

Chase County was located in the Fifth judicial district, and for some time, the court was held in the Congregational church at Cottonwood Falls. The first courthouse was a log building, which was bought in 1863 from George W. Williams for $175.

The first school house was erected in Bazaar Township in 1860, the schools previous to that time having been taught in private homes. The first post office was located in Bazaar in 1860, with George Leonard as postmaster. The Fratchet grocery store, established in 1859 in Cedar Point, was the first business enterprise in the county.

When the Civil War began in 1861, out of the 262 voters of Chase County, 72 enlisted at once. Samuel N. Wood was made captain of Company I, Second Kansas Infantry. He was made brigadier-general of the state militia in 1864, and several other Chase County men achieved distinction in the war to preserve the Union.

In 1871, $40,000 were voted for public buildings, and two years later, the present courthouse in Cottonwood Falls was completed for $42,600. The square in which it stands was donated by the city. The first county officers served without pay. The Chase County Courthouse, constructed of walnut and limestone quarried on the town site, is the oldest Kansas Courthouse still in use. The courthouse was designed in French Renaissance style by John G. Haskell, who was also the first architect of the statehouse in Topeka. Standing 113 feet tall, you can see the courthouse and its red mansard roof from vantage points throughout the county on most days.  Featured within this structure is a three-story spiral staircase made from walnut trees from the Cottonwood River. It was listed on the National Historic Register in 1971.

The first railroad was the Atchison, Topeka & Santa Fe Railroad, which extended its main line from Emporia to Newton in 1871. It was at this time that settlement began to boom. The county only had 1,900 people in 1870 but more than 6,000 by 1880.

The first fair was held in October 1881 at Cottonwood Falls and is still held on the same site as the original. 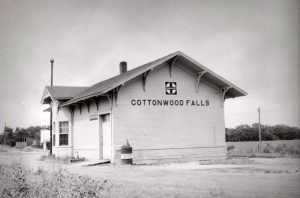 From the beginning, Chase County was a rich agricultural and stock-raising county. Grazing lands were plentiful, and numerous large ranches were established. The total value of farm products in 1910 was nearly $3,000,000, of which livestock amounted to $1,500,000, and corn, the largest field crop, brought $500,000. At that time, the county population was 7,527. The assessed valuation of the property was over $18,000,000, which made the wealth per capita nearly $2,500.

In the next decades, as technology advanced in agricultural pursuits, the population declined.