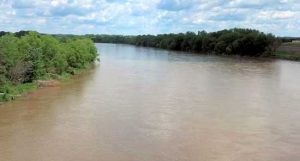 Playing a prominent part in exploring the west, the Kansas River derives its name from the Kanza or Kaw tribe of Indians, which lived on its banks for hundreds of years. The river has been given various names by mapmakers and explorers, such as Riviere des Cans, des Kances, des Quans, Kanza, Konza, Kanzan, etc. One of the earliest references to the river was by Antonio de Herraray Tordesillas, a historiographer of the King of Spain. Jacques Marquette Marquette mentioned the Kanza in 1673. A map of North America’s British and French settlements, published in 1758, called it the “Padoucas River.”

The Kansas River is formed by the junction of the Smoky Hill and Republican Rivers at Junction City and flows in a general easterly direction through Geary and Riley Counties, forms the boundary between Pottawatomie and Wabaunsee Counties, crosses Shawnee County, forms the boundary between Jefferson and Douglas, and of Wyandotte and Johnson Counties in part, and empties into the Missouri River at Kansas City. 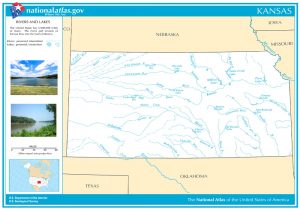 The first map showing the Kansas River is Guillaume de l’Isle’s “Carte de la Louisiane,” which was drawn about 1718. This map, with very few changes, was published in English in 1721. As more and more traders began to interact with the Indians at the beginning of the 19th century, more accurate river reports began to appear.

Among the early accounts of the river, there is much fiction. In his journal in 1811, H.M. Brackenridge said: “The patron of our boat informs me that he has ascended it upwards of 900 miles, with a tolerable navigation.” Morse’s Gazetteer in 1823 said: “the Kansas River… rises in the plains between the Platte and the Arkansas Rivers and joins the Missouri River. It is navigable 900 miles.” In 1820, Stephen H. Long Expedition ascended the river about a mile in a boat, experiencing considerable difficulty getting over a deposit of mud left at the mouth by a recent flood on the Missouri River. Major Stephen H. Long said: “The Gasconade, Osage, and Kansas Rivers are navigable in the spring season, but their navigation seldom extends far inland from their mouths, being obstructed by shoals or rapids. The Kansas River is navigable only in high freshets (sudden overflow) for boats of burden, and on such occasions, not more than 150 or 200 miles, the navigation being obstructed by shoals.” 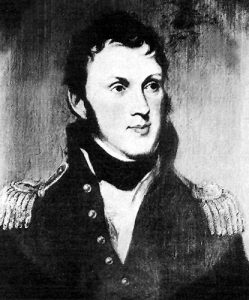 In the travels of Maximilian in the early 1830s, he said: “The steamboat has navigated the Kansas River about seven miles upward to a trading post of the American Fur Company, which is now under the direction of a brother of Pierre Chouteau.” During early overland travel to the far west, much emigration went up the valley of the Kansas River, travelers bound for Oregon, Utah, and California crossing the river at Topeka at Pappan’s Ferry or following father upstream and crossing at Uniontown over a rock bottom ford. Another ford was located near Fort Riley, and considerable travel went that way.

Before the opening of the territory, the river was practically unknown as an artery of commerce. The keelboats and flat-bottomed boats of the early trappers and hunters, laden with supplies for the camp or returning to civilization laden with pelts and other trophies, or the canoes and bull boats of the Indians were practically the only craft to disturb these waters. Shortly after the signing of the Kansas-Nebraska Bill, the first significant influx of settlers arrived on the Missouri River in steamboats, landing at Westport, Missouri, or going up the river a short distance to Fort Leavenworth, near which was soon to spring up the city of Leavenworth. As Kansas sought to become a Free-State, more towns in the interior were established, but more rapid means of getting inland were needed. As a result, an enterprising riverman named Captain Charles K. Baker anticipated the opportunity with the purchase of the steamer Excel for the Kansas River traffic. (See Early River Commerce.) 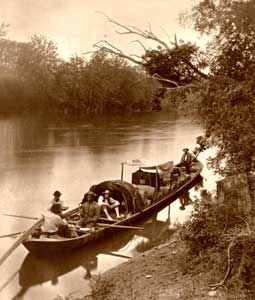 In 1864 the railroads secured the passage of an act by the legislature declaring the Kansas, Republican, Smoky Hill, Solomon, and Big Blue Rivers not navigable and authorizing the bridging of these rivers. This was intended to remove any competition that might develop if the state’s rivers were left open for free navigation.

In carrying out a provision of Congress requiring an examination of the Kansas River with a view of its being kept navigable, J.D. McKown of the United States Engineer Corps, submitted a report on January 8, 1879, of an investigation made of the river between Junction City and the mouth, with the recommendation that an appropriation of $450,000 be made to widen the channel and for the protection of the banks and removal of snags. However, no action was taken by Congress on that report. In 1886 the Kansas Legislature again resurrected the matter and passed a resolution that declared the Kansas River navigable and appropriated funds to remove certain impediments. However, with new forms of transportation already in place, the river was never again utilized for large-scale transportation.

The Kansas River drains an area of 36,000 square miles in Kansas — almost the entire northern half — 11,000 miles in Nebraska, and 6,000 miles in Colorado — in all, 53,000 square miles. In times of excessive rainfall, the river channel has not always been able to carry off the floodwaters of all its incoming sources, among the most important of which are the Smoky Hill, Republican, Big Blue, Delaware, and Wakarusa Rivers.

Compiled and edited by Kathy Alexander/Legends of Kansas, updated September 2022. 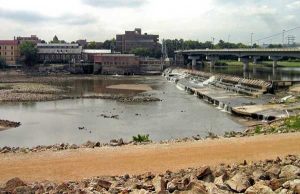 About the Article: The majority of this historic text was published in Kansas: A Cyclopedia of State History, Volume I; edited by Frank W. Blackmar,  A.M. Ph. D.; Standard Publishing Company, Chicago, IL 1912. However, the text that appears on this page is not verbatim, as additions, updates, and heavy editing have occurred.