This portion of the Osage River near Warsaw, Missouri has long since been damned to create the Lake of the Ozarks by Kathy Alexander.

The Osage River, a tributary of the Missouri River, is a 360-mile long river situated primarily in central Missouri but is formed by the confluence of the Marais des Cygnes and Little Osage Rivers in Kansas.

The Marais des Cygnes is sometimes counted as part of the river, placing its headwaters in eastern Kansas and bringing its total length to over 500 miles. 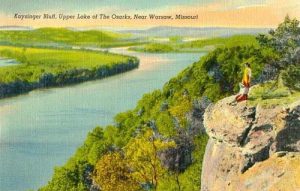 Osage River near Warsaw, Missouri before Truman Dam was created.

The river is named for the Osage Indians who lived in the area at the time of the arrival of the first European settlers. The historic waterway presented significant navigation difficulties for early settlers because of its fluctuating water levels, shallow pools, and sand bars caused by its tight meandering course through the hills.

When including its tributaries, its source is in the southern part of Wabaunsee County, Kansas. It flows eastward through Osage and Franklin Counties into Miami County, where it changes its course toward the southeast and crosses the state line near the center of Linn County. From there, it continues eastward through the Missouri counties of Bates, St. Clair, Benton, Camden, and Miller and finally, empties into the Missouri River a few miles below Jefferson City. In high water, it is navigable for small boats for a distance of about 200 miles.

As early as 1839, the state of Missouri attempted to deepen the channel of the river to aid in navigation. However, early attempts failed due to lack of funding. Later in the 19th century, commercial navigation occurred but was mostly confined to smaller craft that could navigate the tight bends and shoals of the river. Improvements in the channel in the last two decades of the century led to greater commercial traffic. 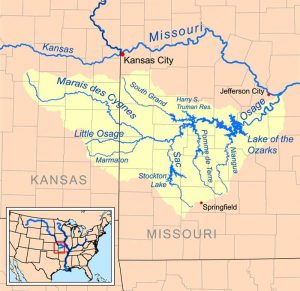 Beginning in 1922, Bagnell Dam was constructed primarily for electricity to form the Lake of the Ozarks. After nine years it was complete, which ended commercial navigation of the river. Truman Dam was authorized by the Flood Control Act of 1954 and completed in 1979. It is located in Warsaw, Missouri.