Price’s Raid and the Battles of Linn County 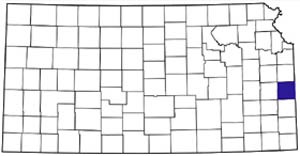 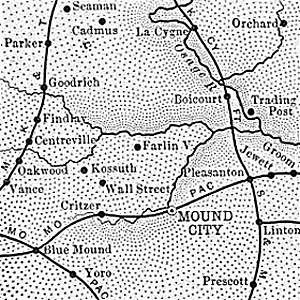 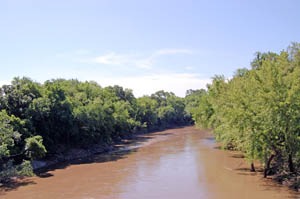 Situated in southeast Kansas, right next to the Missouri state line, Linn County was one of the original 33 counties created by the first territorial legislature. It was named in honor of Lewis F. Linn, a United States senator from Missouri. The gently rolling hills, rich bottomland, plentiful hunting, streams, and timber would soon lure hundreds of pioneers, some searching for a new life, but others who would come primarily to try to make Kansas a slave state and soon become entangled in the bloody Kansas-Missouri Border War.

The first white man to visit the area that would become Linn County was probably Claude Charles Dutisne in his expedition of 1719. The first white men to remain for any time were Messrs. Girard and Chouteau, who in 1825 established a trading post on the north branch of the Marais des Cygnes River in what would become Potosi Township. In 1839 the Catholic Church established a mission among the Potawatomie Indians near the site where Centerville would be settled. It was moved to St. Marys in 1847.

It is believed that the French came up from Louisiana and encouraged the Indians to mine lead on Mine Creek, from which it derived its name. But, the extent of this industry was speculative, and it was quickly abandoned as unprofitable. The French named the Marais des Cygnes River from the many swans on the swamps along the river and called it the “Marsh of Swans.”

As soon as it became apparent that the territory west of Missouri would be thrown open to white settlement, many squatters located claims along the wooded streams of Linn County, mostly by pro-slavery men from Missouri, who cared little for progress and desired only to preserve the institutions to which they were accustomed. Some of these early settlers were James Osborne and Adam Pore, who in January 1854 took claims at the head of Sugar Creek, near the present-day town of Mound City. D.W. Cannon, John Brown, and William H. Murray, all pro-slavery men, and William Park, James Osborne, and James Montgomery who were Free-State men came in the same year. Trouble soon arose between the Free-State and pro-slavery parties, as men of such different political beliefs couldn’t live together in harmony. The first convention, and one of the first causes of trouble, was held at Sugar Mound on February 20, 1855. It was called by James Fox, a pro-slavery leader, to nominate a candidate for the territorial legislature. 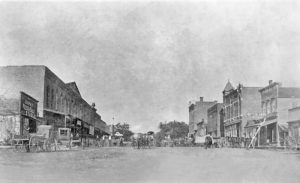 Mound City was started in the spring of 1855 when Mr. Miller opened a store that soon became a well-known pro-slavery headquarters, although the town was not officially organized until 1857.

Trading Post was the earliest settlement in the area, starting as an Indian trading post even before the state became a territory. Later, both Free-State and pro-slavery men were located in the vicinity, but, in time, it became a stronghold for the pro-slavery advocates.

Paris, situated about six miles south of Mound City, was owned by pro-slavery men and, in the early days, became a rallying point from which to make raids upon the Free-State settlers. Up to the middle of the summer of 1856, there was comparatively little trouble between the county’s two political factions.

Difficulties arose over claims, and much of the trouble for years was laid at George Washington Clarke’s door, who it was claimed burned several Free-State settlers out of their homes. He did indeed burn several cabins, but how many remains unknown. 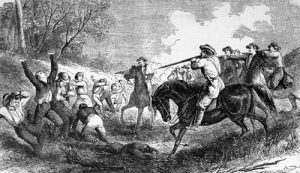 In the summer of 1856, the Missourians were gathering armed forces along the border under Atchison, Reid, and Clark’s leadership. Captain John E. Davis was camped with 150 men on Middle Creek in the county’s northwest corner. On August 24th, Captains Anderson, Shore, and Cline camped in the same locality with a command of about 125 men. In the morning, scouts of the Free-State party brought in word that about 50 of Davis’ men were absent from camp, and an attack was immediately planned. When the Free-State men came within range, the Missourians opened fire, which was immediately returned. The firing lasted about ten minutes before the Southerners retired. In the action, Lieutenant Cline was wounded and subsequently died. This affair is known as the Battle of Middle Creek.

In the fall, the Missourians raided Linn County. They first went to Paris, where some of the settlers joined them, then moved on to Sugar Mound (Mound City), where they burned some houses, robbed Ebenezer Barnes’ house, the store, and the post office. Many depredations were committed, and the Free-State settlers were warned to leave the county. This and like raids influenced James Montgomery to gather a courageous Free-State men company, which started on raids of retaliation into Missouri. This brave band was so daring and meted out vengeance in such a summary manner that Montgomery became known as the Jayhawk leader and was greatly feared by men of the opposite party. 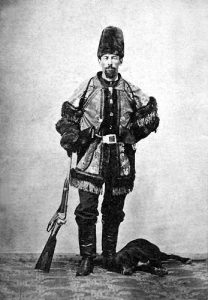 The leader of the pro-slavery party was Charles A. Hamilton, and Trading Post was his acknowledged headquarters. When the Missourians warned the Free-State settlers to leave the county, Colonel James Montgomery raided Trading Post to break up Hamilton’s headquarters. They did not kill or harm anyone but poured out all the whiskey found in the store and warned the pro-slavery settlers to leave, saying that there was no room for both in the county. As a result of this raid, Hamilton led the party which committed the Marais des Cygnes Massacre. After this atrocious affair, the persons who took part in it disappeared. Another Free-State leader who arose was Charles R. Jennison, who became known as one of the most outstanding leaders during the border warfare.

In December, a party of about 125 Missourians again raided Linn County, robbed and pillaged houses, killed one Union man, and others barely escaped with their lives by hiding. A Union force retaliated by marching into Missouri, but met by a stronger force, retired into Kansas. After this raid, Camp Defiance was established on Mine Creek, near the Missouri line, and Colonel Montgomery with the Third regiment was stationed there until the spring of 1862. The most important and exciting event of the Civil War which occurred in Linn County was the Price Raid, in which battles occurred at Mound City on October 25, 1864; at Round Mound, about six miles from the river; and at Mine Creek, six miles south of Round Mound. 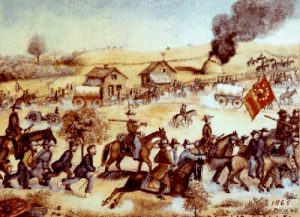 The first store in Linn County was established at Trading Post, which primarily traded with the Indians, although the first whites also bought goods there. The first post office was opened at Mound City at the store of a Mr. Miller, who was appointed postmaster in the spring of 1855. The first school in the county was held during the winter of 1858-59 in the town hall at Blue Mound, and the first marriage in the county was that of J. S. Atkins and Maria Mannington in 1858. The Methodist Episcopal Church was the pioneer religious organization in the county, followed by the  Baptists and United Brethren, who erected churches in Mound City in the early 1860s.

Though Linn County was organized in 1855, it would not be immediate. However, though there is no record to show that a board of commissioners was elected, on January 18, 1856, several men met to determine a county seat.

In March, two men by the names of James P. Fox and Mr. Osborne reported that they had decided a site in the east-central portion of the county, where the settlement of Paris would soon be laid out.

However, most of the county residents were not pleased with the location, and in November 1859, an election was held to relocate the county seat to Mound City. Over the next several years, the county seat would move several more times, first to Linnville, a town just south of Paris and a few miles north of Mound City, in May 1865. It moved back to Mound City in February 1866 after another election. In February 1871, the seat of justice was changed to La Cygne by another vote of the people; in March 1873, it moved to Farmers City; but, as the location provided very little, the county officers refused to go there, and La Cygne remained the county seat de facto until April 1874. Then, another election was held in which Pleasanton received the most votes, but the permanent location’s question was still undecided. Finally, in 1875 a decisive and last election was held, when Mound City was chosen as the seat of justice of Linn County for the third time, where it has since remained. 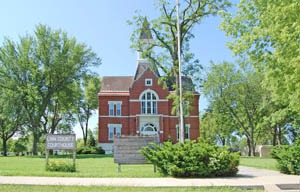 The first railroad in Linn County was the Kansas & Neosho Valley. It was followed by the St. Louis-San Francisco Railway, the Missouri Pacific, and the Missouri-Kansas-Texas Railroads. The economy flourished with agriculture, livestock, rock quarries, and coal mining. Later, oil and natural gas were discovered in the county. In 1910, the population of Linn County was almost 15,000 people.

Over the years, as small farms grew into bigger ones and more and more people migrated to larger cities, Linn County’s population decreased to about  9,600 people today.