Blue Mound, Kansas, located about 13 miles southwest of Mound City in Linn County, got its start in 1854.

The settlement was first situated about ½ mile north of the present-day site and was first called Blue Mounds. When it received a post office on June 10, 1863, the first settler, John Quincy Adams, served as the first postmaster.

Some time afterward, the settlement was moved one mile south. On April 19, 1866, the post office closed. It reopened several years later, on February 19, 1869.

When area residents were assured that the St. Louis & Emporia Railroad would run near the settlement, it moved again. The Blue Mound Town Company was organized and a townsite was surveyed in April 1882. The first building established was a store that was moved from a site three miles to the southeast by D. J. & W. S. Alley. A second store was moved in May from Wall Street by the Innis Brothers and was utilized as a hotel until they completed a new one the following month. A third building was erected for a shoe shop by T. H. Blise, and a blacksmith shop was moved to the fledgling town from the same site as the first store, three miles to the southeast. 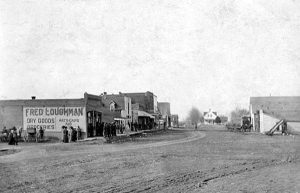 The growth of the town was very rapid. On May 1, 1882, there was but one or two buildings on the townsite; but, by October 1st, there were 56 buildings, including three general stores, a hardware store, a furniture store, two blacksmith shops, a drugstore, harness shop, lumber yard, a hotel, and a population of nearly 200 people. The first school was opened October 2, 1882, by Miss M. E. Weatherbie, who taught 30 students. During the summer, religious services were held by Reverend Hinton of the United Brethren church, and a school was opened in October.

With the building of the second railroad through town, it became a railroad center, and when the coal beds of southeastern Kansas were opened, it came into prominence as a shipping point for coal and manufactured products.

The town’s population peaked in 1890 at 689. In the next years, it would decline every decade.

In 1910, Blue Mound was described as “the banking and supply point for a rich and extensive agricultural district.” At that time, it was called home to 596 people.

It has telegraph and express offices and is one of the leading cities of the eastern counties. In 1910 the population was 596.

Remaining an agricultural community today, it is now called home to about 270 residents.