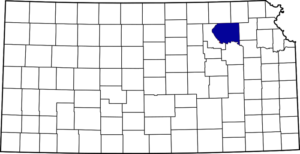 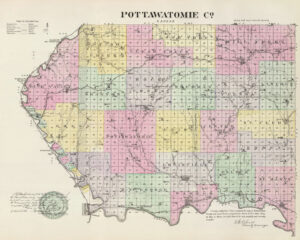 Pottawatomie County, Kansas, formerly a part of Riley County, was organized by the territorial legislature of 1857. The county takes its name from the Potawatomi tribe of Native Americans. The county seat is Westmoreland.

The county is the second from Nebraska and the third west of Missouri. It is bounded on the north by Marshall and Nemaha Counties; on the east by Jackson and Shawnee; on the south by Wabaunsee and Riley, and on the west by Riley. The Kansas River forms the southern boundary, and the Big Blue River the western.

The general surface is rolling, with bluffs along the Kansas and Big Blue Rivers, where limestone was extensively quarried for building purposes. Good quality gypsum was found along the water courses, especially at the mouth of Spring Creek. Potter’s clay was found in the southern and central parts of the county. There were thin veins of coal in the east and south which received little attention. There was said to be a mineral spring of medicinal properties at Onaga. Besides the Big Blue and the Kansas Rivers, the Vermillion River flows south through the eastern portion of the county and empties into the Kansas River. Its tributaries from the west are French and Mill Creeks, and the tributaries of the Big Blue are Spring Creek with eastern branches, Four Mile as a western branch, Shannon, Carnahan, McEntire, Cedar, and Elbow Creeks.

Pottawatomie County was crossed by several trails in the early days, including the Oregon Trail laid out in 1842, the Fort Leavenworth-Fort Riley Military Road in 1852, and the Central Overland California and Pike’s Peak Express at the northern edge of the county. 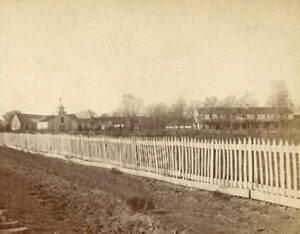 The first white people to settle within the county were Catholic missionaries who went to St. Marys a few weeks preceding the immigration of the Pottawatomi Indians to their reservation, of which St. Marys was a central point. This was in 1848. The mission and a log house near it were built the same year. The Indians contributed to the erection of the mission school, which was 15 years in advance of the common schools. A band of Michigan Pottawatomi joined their tribesmen on the reservation in 1850. In 1853 the population consisted of the Catholic missionaries, a few traders, five government employees, and the following settlers: Dr. L. R. Palmer and his family, Alexander Peltier, Basil Germore, William Martell, Francis Bergeron, Antoine Tescier, J. B. Frapp, Robert Wilson and family, Joseph Truchey, Alva Higbee, O. H. P. Polk, Baptiste Ogee, Mrs. Zoe Durcharm, Mrs. E. A. Bertrand, Mrs. A. P. Bertrand, and Mrs. Clara Bertrand.

Dr. Palmer, who came in September 1850, was later a member of the first Free-State territorial council and the convention that framed the Wyandotte Constitution. His son, Francis X. Palmer, born March 17, 1851, was the first white child born in the county. James Graham, who came with the priests, was probably the first white settler. Robert Wilson was the first man to stake off a claim, and he built the first house outside of the reservation on the site of the present town of Louisville in 1853. The first Indian agent was Luke Lee, stationed at St. Marys. The last was Dr. Palmer in 1870. 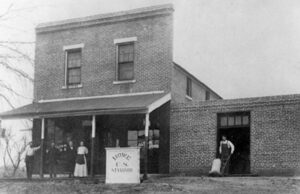 Vienna and Louisville townships were organized. In 1861 an election for the location of the county seat was held. Louisville won by a majority of 12 votes, and the legislature declared it the county seat the next year. It continued as such until 1882 when another election gave the honor to Westmoreland. By that time, 15 new townships had been organized, making 21 in all. The public lands were surveyed in 1857-58, and the settlers began to get clear titles to their farms, which they had been occupying and improving for several years.

During the Civil War, Pottawatomie County contributed it quota of soldiers for the nation’s defense and took care of its own troubles.

Pottawatomie County was one of the early sites of the Kansas Pacific Railroad in 1867. 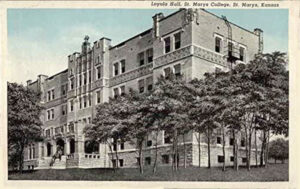 St. Mary’s was established as a girls’ academy in 1869 after Indians were moved out of the area. The college was chartered in 1870. A boys’ school opened in the 1880s and granted its first degrees to three young men in 1882. The college closed its doors in 1931 during the Great Depression. It became a seminary in the 1930s. 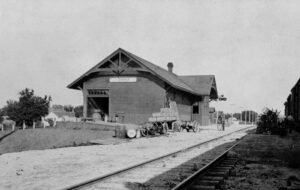 In 1910, the county was supplied with railroads to handle its products. The main line of the Union Pacific Railroad crossed the extreme south following the north bank of the Kansas River; the Topeka & Marysville branch of the same road was extended to Onaga and was in the process of construction northwest from that point. The Leavenworth, Kansas & Western branch of the Union Pacific entered in the northeast and crossed west to Elaine, then southwest into Riley County. The Kansas, Southern & Gulf operated a line from Blaine to Westmoreland. At that time, there were 98.23 miles of track in the county.

There were 120 organized school districts in the county and several high schools. St. Mary’s College at St. Mary’s was one of the leading Catholic educational institutions in the West. There was also a Catholic parochial school at that place, an Evangelical school at Belvue, and St. Luke’s (a German Lutheran school) at Onaga.

The first county fair was held in 1907, probably at Onaga.

In the 1950s, Tuttle Creek Reservoir began to be built.

The county holds several interesting sites including the Indian Pay Station in Marysville, the Old Dutch Mill in Wamego, the Coffey Archeological Site on Tuttle Creek, the Vieux Crossing of the Oregon Trail, and St. Joseph’s Church in St. George. 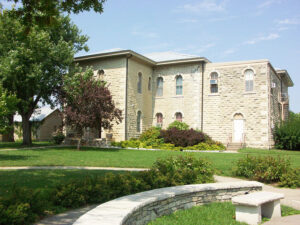