Blaine is an unincorporated community in Pottawatomie County, Kansas. It is also an “extinct town” as it no longer has a post office. However, it still has a small resident population, several homes, and the beautiful St. Columbkille Catholic Church.

Many of the first settlers in the area immigrated to America during the Great Famine of Ireland. The community was settled along Bluff Creek by 60 Irish Catholic families in 1873. The Irish immigrants came from a poor Irish neighborhood in St. Louis, Missouri. The community was named Butler City, named for Father Thomas Ambrose Butler, an Irish Priest in St. Louis, who encouraged them to “colonize” in Kansas.

When the town wanted to establish a post office, the residents found that there was already a town named Butler City in Kansas, so they chose the name Blaine after James G. Blaine. The post office opened on December 21, 1874, with Dennis V. Cox as postmaster. 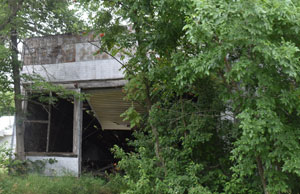 An overgrown business building in Blaine, Kansas, by Kathy Alexander.

A short time later, a narrow-gauge railroad called the Kansas Central Railway came through the area. Though the post office was named Blair, the railroad station was called Butler. Jacob Weederbrook was the station agent.

Before long, Downing & Cox had a general store, John O’Connell ran a blacksmith shop, Thomas McDonald was a lumber dealer and  J. W. Bell and Harry Donley were hotel keepers. In 1881, the St. Columbkille Catholic Church was built. The frame building measuring 30×50 feet was built at about $2,500. It was built in 1881. A schoolhouse was also built for $400. The Mount Calvary cemetery was established in 1885.

A few German families settled in the community in the following years. At Blaine’s peak, about 200 people were living in the small town.

At some point, the railroad was standard-gauged by the Union Pacific Railroad.

In 1908, a larger red brick gothic-style church was built to replace the previous church. The church continued to serve area parishioners in the following decades and still holds weekly mass today.

In 1910, Blaine was located at the junction of the Leavenworth, Kansas & Western branch of the Union Pacific Railroad and a branch of the Kansas Southern & Gulf, the latter connecting it with Westmoreland, nine miles south. At that time, all the main lines of business were represented in the community, including banking facilities. It also had an international money order post office with three rural routes.

A Catholic school was opened in 1919 and was active until 1966. A storm damaged both the school and church in June 2010. While the church was repaired, the school was razed. Soon afterward, a parish community center was built for social functions.

In 1934, the railroad tracks in Blaine were abandoned. 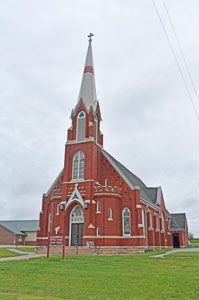 Today, there are still several homes in the area and a small population.

Blain is located 29 miles northeast of Manhattan at the crossroads of K-99 and K-16.