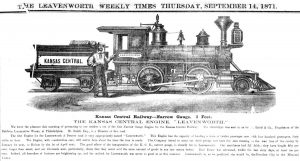 The Kansas Central Railway Company was incorporated in June 1871 to build a railroad and telegraph line across Kansas from Leavenworth to Denver, Colorado, where it would meet a connection with the Denver & Rio Grande Railroad.

At that time, many of the leading businessmen of Leavenworth felt that their city had been bypassed by the major east-west routes of the standard gauge railroads, which had centered at Kansas City, Missouri, to the south and St. Joseph, Missouri, to the north.

The railway company initially built a narrow-gauge railroad because the owners thought the issue would pass easier if the cost per mile was less. Construction began in July 1871, and by August 11, 1872, the tracks reached Holton, Kansas, a distance of 55 miles.

Some competitors didn’t like the progress being made, as the Kansas City Journal of Commerce, in a hostile editorial on October 11, 1871, characterized the narrow gauge’s route as 600 miles, of which the western 300 were “uninhabited and inhospitable.” They also predicted that the company would go bankrupt and the line would never be completed.

Unfortunately, the newspaper would be right. After the tracks reached Holton, construction halted due to a lack of financial backing. In March 1874, service was cut from two daily trains to one. 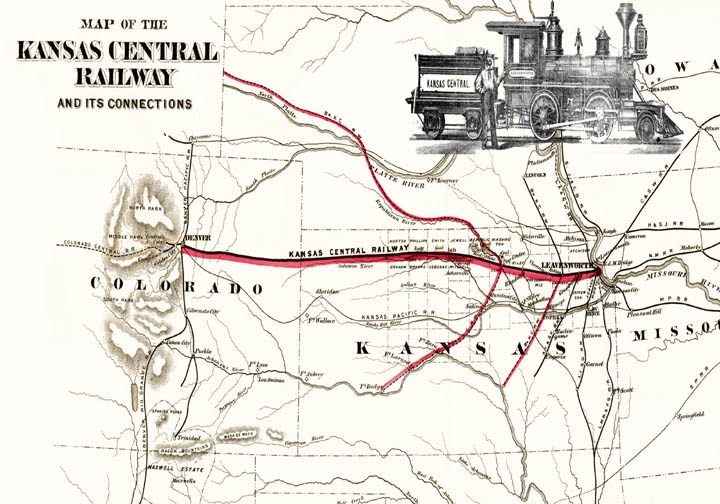 Construction resumed in June 1877 despite a strike by unpaid contractor employees, and the track reached Circleville (63 miles) in September and Onaga (82 miles) in early 1878. In 1879, the railroad reached Blaine, another 13.4 miles west. However, that same year, the company was still struggling financially. In April 1879, the property was sold at a foreclosure sale in Leavenworth County for $252,000 to C. K. Garrison, president of the Missouri Pacific Railroad, and L. T. Smith, original owner and promoter of the Kansas Central Railway Company. Later that year, in November, the company was sold by Garrison and Smith to Jay Gould, a railroad magnate and financial speculator, for $431,820.

Though the Union Pacific now owned the Kansas Central, it retained its corporate identity, L.T. Smith remained in charge, and the railroad continued to head westward. The tracks reached Garrison (118 miles) on August 3, 1880, Clay Center (146 miles), and Miltonvale (165 miles) on April 1, 1882. The tracks were at a junction with the Atchison, Topeka & Santa Fe Railroad’s branch to Concordia, Kansas, and Superior, Nebraska. The Kansas Central had nine locomotives and an office car by that time.

In September 1897, the Kansas Central Railroad was sold to the Leavenworth, Kansas & Western Railway, a new company organized for that purpose.

In 1908, the Leavenworth, Kansas & Western Railway was sold to Union Pacific Railroad.

In March 1935, the Union Pacific abandoned and removed approximately 140 miles of Leavenworth, Kansas & Western Railway from Knox, Kansas, a station near Leavenworth, west to Clay Center. When these tracks were abandoned, 24 towns along the line were left without rail service. 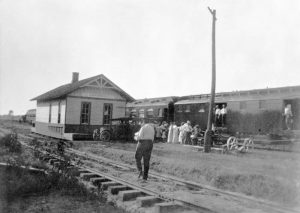