Tuttle Creek Lake and State Park is located in the scenic Flint Hills of northeast Kansas. The lake is a reservoir on the Big Blue River five miles north of Manhattan. It provides 12,500 surface acres of water and 100 miles of shoreline, making it the second-largest lake in Kansas.

It was built and operated by the Army Corps of Engineers for the primary purpose of flood control. Secondary functions of the project include releasing water stores to maintain barge traffic on the Mississippi River during seasons of drought and maintain water quality for downstream communities.

The Corps also maintains a multi-use conservation pool for fish and wildlife enhancement and recreation, including fishing, hunting, and boating. 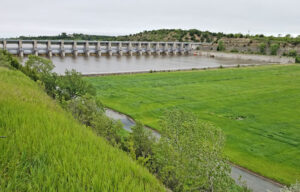 A reservoir for flood control, conservation, and other purposes near the mouth of the Big Blue River was first mentioned in official documents in 1928. The 1938 Flood Control Committee Report of the 75th Congress recommended seven reservoirs for the Missouri River Basin. One of these was Tuttle Creek Reservoir.

The Flood Control Act of 1938 authorized the construction of Tuttle Creek Reservoir. Funds were appropriated for initial planning in 1944. The first exploratory core hole was drilled in the spillway area on June 6, 1944.

A 1950 study looked at the possibility of a series of reservoirs in the upper Blue River Basin as an alternative to Tuttle Creek Reservoir. The single reservoir was the most feasible for controlling floods on the Big Blue River. This study also designated capacities for flood control, conservation, and sedimentation pools.

A series of 1951 flood events culminated in the disastrous flood of July 1951. It far exceeded all other floods on the Kansas and lower Missouri Rivers in magnitude and damage. Rains of unprecedented intensity occurred over the Kansas River Basin; from July 9 to July 13, some areas received 18.5 inches, and the eastern half of the basin averaged eight inches. All transportation was brought to a standstill, communication lines were down, radio stations were inundated, and electric power and water facilities were disrupted. One hundred sixteen cities and towns were affected, and 85,000 people were evacuated. Over 22,000 residences in the Kansas River Basin were inundated, and nearly 2,500 were demolished. More than 3,000 businesses were flooded, of which 336 were destroyed. Over 10,000 farms suffered flood damage. The swift current of the floodwaters scoured many fields and deposited heavy blankets of sediment and sand over others. Total losses in the Kansas River Basin exceeded $725,000,000.

The 1952 Definite Project Report, approved by the Chief of Engineers in March 1952, served as the basis for the design of Tuttle Creek Dam and Reservoir. Actual construction began on October 7, 1952, and continued through December 1953, when work was suspended due to a lack of additional appropriations. Construction work resumed in December 1955.

The Corps acquired title to 33,847 acres in fee simple. Flowage easements were purchased on an additional 27,376 acres. The Corps negotiated with 1,713 landowners during the 13 years (1952-1965) it took to procure project lands. 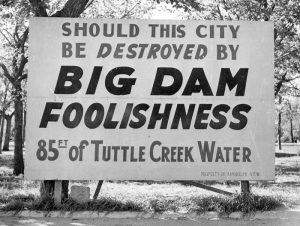 Beginning in the early 1950s and continuing until after construction was resumed in 1955, vigorous opposition to the project was directed at local, state, and national officials. The dam affected 3,000 Blue Valley residents, and the controversy surrounding the decision to build it was intense. Ten towns were affected: Stockdale, Randolph, Winkler, Cleburne, Irving, Blue Rapids, Shroyer, Garrison, Barrett, and Bigelow.

The proponents of the project, however, prevailed. During later construction phases, local opposition had dwindled to a few landowners who resisted right-of-entry and evacuation until compelled to yield by court order. As prospects of a large lake became apparent, favorable regard for the project grew.

Construction was completed, and operation began on July 1, 1962. The reservoir was dedicated on June 1, 1963. The total cost was $80,051,031.To date, Tuttle Creek Lake has prevented over three billion dollars in damages, yielding an actual return of $37.68 on each dollar invested.

The 1,200-acre park comprises five units, including River Pond, Rocky Ford, Cedar Ridge, Fancy Creek, and Randolph. Many sites around the lake have been developed for fishing, boating, camping, picnicking, and outdoor sports. 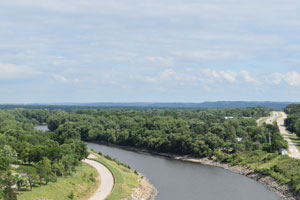 Eleven cabins are offered at Tuttle Creek State Park, with seven located in the River Pond Area and four in the Cedar Ridge Area. Each cabin offers a full-size bed in the bedroom, a full kitchen with basic pots and pans, table service for six, a full bathroom, heating, air conditioning, and an outdoor area with a charcoal grill, picnic table, and fire pit.

Numerous nature trails, a mountain biking trail, and a scenic equestrian trail offer visitors a variety of routes to experience. Scenic picnic areas, an 18-hole disc golf course, volleyball courts, horseshoe pits, and conveniently placed restrooms and shower facilities to accommodate park visitors. The state-of-the-art Fancy Creek Shooting Range is open the first and third full weekends of each month. The Luke Nihart archery range is at River Pond Area and is open during daylight hours. Archers provide their own equipment. The River Pond Area has a swimming beach.

Excellent channel cat and flathead fishing are available in the lake and the river above and below the lake. Fair numbers of bass are caught near standing timber and brush piles, and saugeye can be taken off the face of the dam and in the river below. During the Spring, there is ample opportunity to catch master angler white bass and crappie. Trout are stocked in Willow Lake during the Fall and Winter. The 12,000-acre wildlife area adjacent to the park offers excellent hunting and wildlife-watching opportunities. 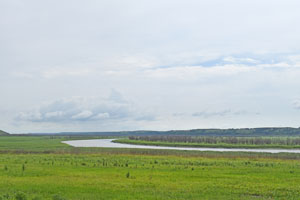