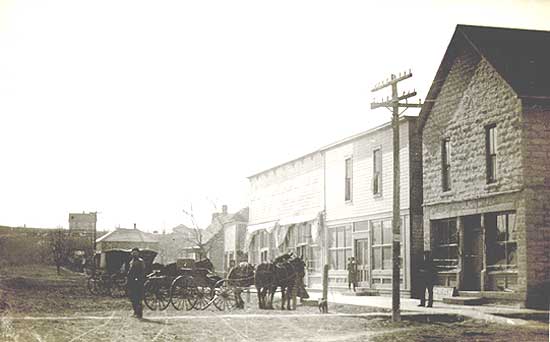 Bigelow, Kansas, an extinct town today, was located in Marshall County six and a half miles southwest of Frankfort.

Located on the Missouri Pacific Railroad, the town was founded in 1881 and named for General Alfred Bigelowm and official for the railroad. It gained a post office the same year. H.A. Carpenter built and lived in the first house in Bigelow and John Watters was the first blacksmith.

In 1881 Jacob Inman opened work in the fine limestone quarries and a few houses were built for those who worked there. Inman also platted 40 acres of his farm into town lots and sold them at a nominal price. Many men took advantage of the offer and secured homes. 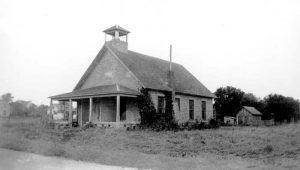 Bigelow Christian Church in about 1925.

In 1883 a schoolhouse containing two rooms was built from the native limestone. In 1884 the Christian Church was built. In 1894, the First Methodist church was built with limestone taken from the quarries.

The town was best known for its limestone quarries — so much so, that the railroad liked the quality so much, they purchased the entire quantity of the quarry.

In 1910, Bigelow’s population peaked at 200, at which time it had a bank, express and telegraph offices, a newspaper, lumberyard, and several stores. Unfortunately, the quarry closed the same year, causing the rapid decline of the town.

By 1917, the town still supported two general stores, a bank, a lumber and coal dealer, a blacksmith, and a hotel.

The quarry reopened briefly in 1940. The post office closed in 1960 and the town was demolished during the construction of Tuttle Creek Lake. All that remains of the old town is a historical marker at the intersection of 17th and Zenith Roads and Antioch Cemetery.