The neighborhood, of which Frankfort became a primary trading point, was settled in 1855-56 by Free-State men from Ohio and Pittsburgh, Pennsylvania.

In August 1857, a post office was established with D.C. Auld as the first postmaster and called Nottingham. It was located about two miles southeast of where the future town of Frankfort would be established. However, it would be several years before a town would be officially organized. 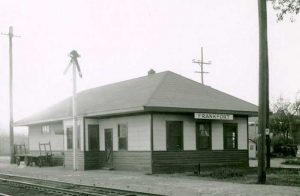 With the coming of the railroad that changed, and in 1867 the Frankfort Town Company was organized at Marysville, and in August of the same year, the company purchased Section 16, Township 4, Range 9, and laid out a townsite. It was originally called Frank’s Ford, named for Frank Schmidt, one of the founders of the town, but soon adopted the name of Frankfort. On consideration of receiving a station, depot, and side-track, the town company gave the Central Branch Railroad Company one-half of the townsite.

The railroad reached Frankfort in October 1867, and in the fall of the same year, the depot was erected. The first houses were built that year by J. S. Magill, R. S. Newell, and Frank Schmidt. O. C. Horr established the first store in December 1867. In 1868, seven buildings were erected, among them being two business houses by Jacob Weisbach and O. C. Horr. The next year, 1869, showed a marked increase in the building operations, as there were 54 good substantial buildings erected, among which was the first hotel, erected by J. Heasley. Unfortunately, it would only operate for one year.

Trouble occurred in Frankfort August 14, 1869, in which one of the oldest and most respected citizens, James Vaugham, was shot by a questionable character named Gus Quarles. It appears there had been for some time previous to the shooting, an antagonistic feeling between the two parties — Quarles having circulated the report that Vaugham was a bushwhacker and had served with William Quantrill during his raids. On the day of the shooting, Quarles, who had been hunting, stopped in Jacob Weisbach’s store, where he met Vaugham, who desired an explanation in regard to the report circulated by Quarles. Quarles did not deny what he had said, and from this an exciting altercation arose, in the midst of which Quarles raised his gun and placing the muzzle within three feet of his victim, fired, the charge taking effect in the arm and side of Vaugham. As the wounded man did not fall Quarles immediately jumped on his horse and left for parts unknown. It was afterward ascertained that he had gone to Missouri, where he soon after died. Mr. Vaugham finally recovered from his wounds.

In December 1869, the post office was moved from Nottingham into town and the name was officially changed to Frankfort on December 28th with O.C. Horr as the postmaster. 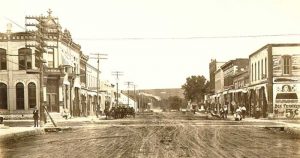 School district No. 35 was organized in March 1869, at the home of O. C. Horr.  In the spring of 1870, bonds to the amount of $1,600 were issued to build a school building, and a frame school, and soon a 24×40 feet frame building was erected. This building was used until 1880 when it was sold and is now used as a private residence. During the same year, a new edifice built of limestone was completed at a cost of $4,000. In 1874, an addition was made to the main building and is used for primary purposes.

In the spring of 1869, a Methodist Episcopal congregation was established and the first services held in the railroad depot. Thereafter, they were held in various public halls until a church was finally built in 1881. The Presbyterians had also organized, utilizing the schoolhouse as a place of worship before work began on a building in 1874. The stone structure, measuring 32×45 feet was dedicated in December 1877. 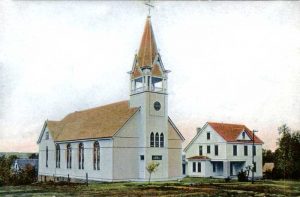 In 1870, a two-story frame building, measuring 24×40 feet was opened as a hotel by W. Bailey, and known as the Bailey House. It soon changed management and became known as the Frankfort House, which would later be enlarged and become known as being a first-class hotel.

Frankfort was incorporated as a city of the third class in 1875 and an election was held in which R. S. Newell was made the first mayor.

The first newspaper was the Frankfort Record, which was established on July 25, 1876, by Campbell & Bros. Over the next few years it would change hands becoming known as the Headlight, and later the Frankfort Bee.

The first bank was established in June 1878.

The original school building was utilized until 1880 when it was sold and used for a private residence. During this same year, a new edifice built of limestone was completed at a cost of $4000. In 1884 an addition was made to the main building and it was used for primary purposes.

In 1902-03, a new school was built to replace the 1880 building which had been struck by lightning on August 20, 1902, and burned beyond repair. Within weeks after the fire, a local architect was hired to prepare plans and specifications for a new school building. Before long stone and carpentry work began and the school was completed in the Fall of 1903. The two-story rectangular structure built in the Renaissance style with a full basement partially above grade. The cost of the building was $20,000. 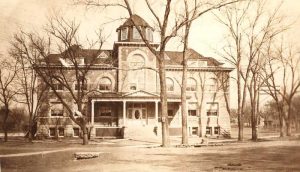 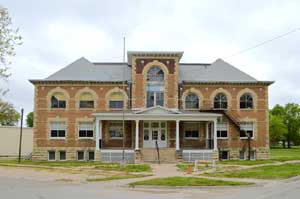 The old Frankfort School is being restored today. Photo by Kathy Weiser-Alexander.

At first, the elementary school used the first floor and a three-year high school occupied the second floor. A fourth of high school was added in 1905. As the population of surrounding rural areas decreased, many schools were consolidated with Frankfort District No. 35. Following the construction of a new high school in 1923, the building was utilized used only for elementary classes. At some point, those too were moved, but the building still stands and is was listed on the National Register of Historic Places in 1972.

Located at the northwest corner of Locust and Fourth streets, the walls are constructed of greyish-brown face brick trimmed with limestone. A broad one-story porch supported by six wood columns with ionic capitals emphasizes the main entrance on the southeast facade. Another outstanding feature that makes the building particularly notable is the use of decorative stone trim, especially at the windows. 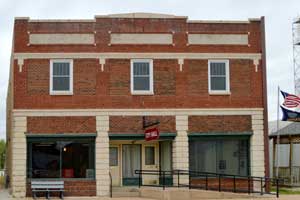 Over the years, the only major changes to the building’s exterior have occurred above the roofline. A cupola formerly was situated atop the entrance tower. Dormers similar to the one behind the chimney were located in each of the outward-facing segments of the hip roofs and centered on each side, except the front.

By 1910, Frankfort had become the third-largest town in Marshall County and was serviced by Missouri Pacific Railroad which primarily shipped grain and produce. All principal lines of businesses were represented in the town, as well as good schools and churches, weekly and daily newspapers, express and telegraph offices, and six rural delivery routes go out from the Frankfort post office. At that time the town’s population peaked at 1,426.

In December 1915, James Kennedy, one of the county commissioners, built one of the best garages in the state. Open day and night; trained mechanics were employed and an extensive business was done, in the modern garage that included a well-furnished restroom. 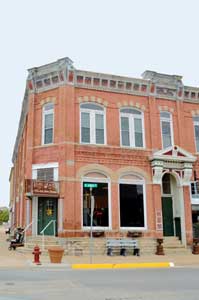 A beautiful building in Frankfort, Kansas by Kathy Weiser-Alexander.

By 1917, many improvements had been made to the school system, the Frankfort House had become the Savoy Hotel and remained a favorite stopping place for visitors, the town boasted grain elevators, an electric light plant, physicians, and all manner of retail businesses. These included two drug stores, two hardware stores, two lumber companies, a general store, clothing store, dry goods store, produce company, a grocery store, a lunchroom, millinery, and a Studebaker auto Agent. The Crevier elevator shipped about 400,000 bushels of grain annually. Professionals included an attorney, a tailor, two optometrists, an undertaker, and two physicians.

Over the next decades, Frankfort’s population gradually decreased and today is called home to about 695 people.