Louisville, Kansas, is a small town in south-central Pottawatomie County. 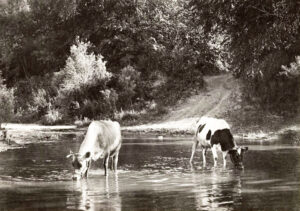 The crossing of Rock Creek on the old military road.

The area was once part of the Potawatomi hunting grounds, and a large majority of settlers were either associated with the Potawatomi Indian Reservation or commerce on the Oregon Trail.

A post office called Rock Creek was established on March 3, 1856.

Robert Wilson and his sons, James and Louis, settled here in 1857. They soon built a log cabin on Rock Creek at the crossing of the Fort Leavenworth–Fort Riley military road. The Wilsons were some of the earliest settlers in this region and also built a frontier hotel. The settlement that grew up around it was on both sides of Rock Creek, and there were medicinal springs with medicinal properties near the town. 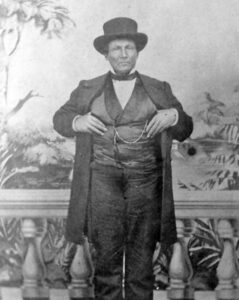 Louis Vieux Sr. was a prominent citizen of the area who operated a toll bridge on the Oregon Trail across the Vermillion River, three miles east of Louisville. Part Potawatomi, he and his wife, Sha-Note, moved from Iowa to Indianola, Kansas, in 1846. Sha-Note died in 1857, and Vieux moved to the Vermillion River near present-day Louisville. Vieux then began trail crossing business and worked as a caller for the U.S. Government working the pay station in St. Mary’s. He also served on the tribal council and made trips to Washington, D.C., on behalf of the Pottawatomi. Vieux also signed the treaty that split the Pottawatomi into two separate tribes — the Prairie Band and Citizen Potawatomi Nation. Vieux died in 1872 and left behind a 200-page will, leaving half the town of Louisville, all of Belvue, and other personal property to his wife and children. He was buried in the Vieux Family Cemetery on top of a hill when he died. Nearby, on the banks of the river, is a cholera cemetery from 1849, estimated to contain at least 50 graves, although only two stones remain. Across the river are the graves of seven unknown soldiers.

During Horace Greeley’s overland trip in 1859, he was a guest of Robert Wilson at his log cabin hotel for several days when the Leavenworth and Pike’s Peak Stage Line was detained at this point by high water.

In 1861, Louisville became the county seat of Pottawatomie County.

Several hack lines ran out of Louisville — one to Wamego, one to Irving, and one by way of America City to Corning.

In 1865, when the Butterfield Overland Despatch stagecoach left Atchison, Kansas, making its way to Denver, Colorado, on the 592 miles long Smoky Hill Trail, Louisville was a stagecoach stop. It remained a stagecoach stop until the Kansas Pacific Railroad was also pushing towards Denver, and by 1870, the stage line was no longer needed.

On March 14, 1866, the Louisville Bridge and Ferry Company was chartered that proposed to operate a bridge and ferry over the Kansas River. Louisville, three miles due north of Wamego, and approximately four miles from the Kansas River, also had a ferry.

On July 17, 1867, A. Sellers started the Pottawatomie Gazette newspaper at Louisville, the first one in the county. In February 1868, Patrick McCloskey bought a half interest in it, and on July 5, 1869, he obtained the other half from Mr. Sellers. In 1870 it became the Kansas Reporter. In the following years, it changed hands several times before moving to Wamego in 1881.

On July 19, 1867, the town’s name was changed to Louisville in honor of Robert Wilson’s son, Louis, and for Louis Vieux, a successful businessman in the area.

In 1871 work was started on a bridge built by the two townships embracing Louisville and Wamego. The bridge was completed the following year. At that time, the ferries were discontinued.

DISCONTINUED.–The old ferry across the Kaw, that has served the public for more than seven years, is at last discontinued, and the boat and fixtures have been removed. In its vocation, it has served us well, but few, if any, accidents having occurred under its management, but it is superseded by the superiority of the great over the past, and it must now give way to its more desirable successor — The Great Iron Bridge. The original wire stretched across the river is now for sale by the old ferry company. 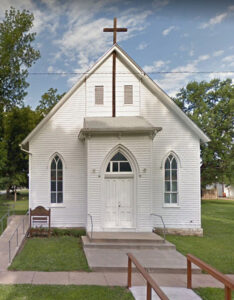 By the early 1880s, two churches were in the community — the Congregationalist and the Methodist Episcopal.

In 1882, Louisville was again a contender for the county seat of Pottawatomie County but lost out to Westmoreland. That year, the Union Pacific Railroad was built through nearby Wamego, and the town’s population swiftly declined.

In 1910 Louisville was connected to Westmoreland and Wamego by a daily stage line. At that time, it had a weekly newspaper, a flour mill, a money order office, and a population of 264.

That year, Philip Wiley Taylor, a young man from Louisville, started his professional baseball career with the minor league Ellsworth team of the Central Kansas League. The right-handed pitcher was born in Wamego in 1888 but at some point moved to Louisville. Ellsworth was the first stop in Taylor’s professional baseball career, and his 16-8 record helped the team secure the 1910 Central Kansas League pennant.

He advanced to the Austin Senators of the Texas League in 1911, appearing in 37 games and compiling a 22-14 record with 311 innings pitched. He helped lead Austin to the 1911 Texas League pennant.

“Taylor of Austin is credited by the league batsmen as being the best of them all with the actual possession of the stuff on the ball. He was seldom bumped hard and was almost always a remarkably effective pitcher. Taylor has a varied assortment of curves and excellent control.”

— The Houston Post, after picking Taylor for its All-Texas team 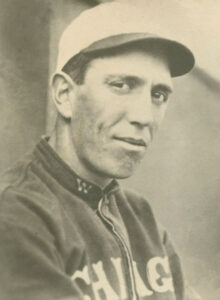 Taylor was then purchased by the Detroit Tigers, making his major league debut on September 6, 1911. He was returned by Detroit to Austin in the spring of 1912, where he appeared in 35 games, compiling an 11-16 record. In August 1912, he was purchased from Austin by the Chicago White Sox and appeared in three games for Chicago, all as a starter, and compiled a 0-1 record with a 4.95 ERA in 20 innings pitched.

Taylor again returned to Austin at the start of the 1913 season before joining the St. Louis Browns at the end of August. Taylor appeared in five games for the Browns in the final month of the season, four of them as a starter. He returned to the Browns in 1914 for his longest stint in the majors, appearing in 16 games. He appeared in his final major league game on August 5, 1914.

In the next decades, Louisville continued to gradually lose its population. At some point, its schools closed, and the community is now served by Wamego USD 320 public school district. 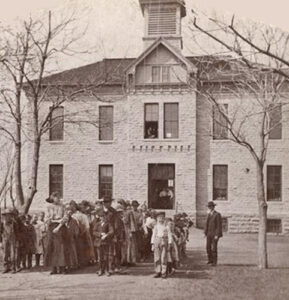 Louisville is located 11 miles southeast of Westmoreland and about three miles north of Wamego.

Oregon Trail – Pathway to the West