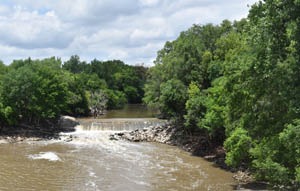 The Solomon River, once also known as the Nepaholla River, is formed by two branches — the north and south, both of which rise in Thomas County, Kansas, within ten miles of each other. For the first ten miles, the branches flow almost parallel to each other at a distance of not over 4-5 miles. The north branch flows in a northeasterly direction through Thomas County, the northwest corner of Sheridan County, the extreme southeast corner of Decatur County, the southern portion of Norton and Phillips, the southwest corner of Smith, the northeast corner of Osborne, and into Mitchell Counties. The south fork flows almost due east through the counties of Thomas, Sheridan, Graham, Rooks, and Osborne and unites with the other branch about two miles east of the west line of Mitchell County. 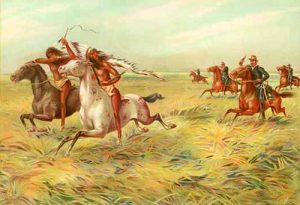 The main stream then makes a bend to the southeast across Mitchell, the southwest part of Cloud County, across Ottawa County and the extreme northeast corner of Saline County, where it unites with the Smoky Hill River near the town of Solomon. Including its branches, the Solomon is about 300 miles long, has several small effluents, and waters one of the prettiest sections of the state, approximately 6,000 square miles in extent.

Though the exact location is unknown but is thought to be near Penokee, in Graham County, the Battle of Solomon Fork took place along the river in July 1857. Between 1863 and 1864, European pioneers settled the area around the river, and Fort Solomon was located on the east side of the Solomon River.

The legislature of 1864 declared the river unnavigable, although there is no history of its ever having been considered. One of the first all African-American settlements, Nicodemus, is near the Solomon River and today is preserved as the Nicodemus National Historic Site.