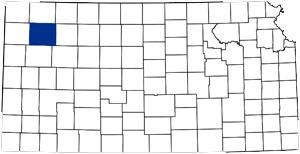 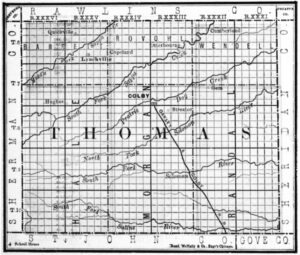 Thomas County, Kansas, in the northwestern corner of the state, is located in the second tier south of Nebraska and the second east from Colorado.

Before white exploration and settlement, the area was utilized as hunting grounds for various migratory Indian tribes. The rich grass prairie teemed with wildlife, including bison, antelope, and horses.

Thomas County was created by legislative action in 1873. It was named for George Henry Thomas, a Union general during the Civil War and hero of the Battle of Chickamauga, Georgia. Before the county government’s organization, Thomas was made a township and attached to Sheridan County for judicial purposes. 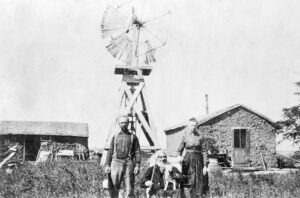 The first white settlement in Thomas County was established in the spring of 1879, south of the present town of Gem, and a post office was established at Letitia on April 1, 1879. The first settlers homesteaded under very adverse conditions and, due to the absence of trees, homes consisted of sod houses or dugouts. The 1881 Census showed a population of 161, and there was a need for a town where lumber and provisions could be brought.

In 1881, a man named T. D. Hamilton, who was hunting with a small party within the county’s boundaries, discovered a cave full of human skeletons. The men were following a wounded wolf that took refuge in the cave. They found the cave to be the burial place of a prehistoric race on exploring it. The interior consisted of two chambers with perpendicular walls hewn out of the rock. Weapons and other relics were found with the bones of the dead. The bodies were in various positions, some standing, some sitting and some lying. A passageway had been chiseled out and far in the interior was a stream of water. At one point in the cave, a single sound would produce a score of echoes.

Among the first settlers were in the county were J. R. Colby, J. W. Irwin, who became the first postmaster at Colby, H. W. Miller, James Auld, Dr. D. M. Dunn, and E. P. Worchester. In January 1885, there were about 161 inhabitants in the county. On March 12, the Thomas County Cat newspaper was established by Worchester and Dunn and printed in the sod house of H. W. Miller at Colby. It was the first newspaper published in the county, though the next week, another paper was started by Brown & Son and printed at the residence of J. R. Colby, the man in whose honor the town was named. 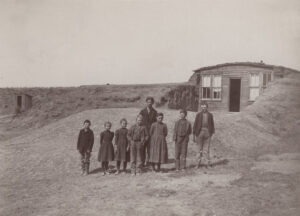 The first school district was organized in 1882, five miles south of Colby.

In the spring of 1885, a charter was issued to the Colby Townsite Company, which picked a site for a town. J. R. Colby, a civil war veteran, had homesteaded at the county’s geographical center, and the Colby post office was established. The Townsite Company secured Union Pacific Railroad land approximately three miles north of Colby’s homestead. He agreed not to pursue establishing a town on his homestead if the new townsite’s location could bear the name “Colby.”

Settlers came in by the hundreds during that year, and by the end of the summer, the residents petitioned for a separate county organization. W. G. Porter was appointed as the census taker. The returns were made early in October and showed a population of 1,900, of whom 777 were householders.

October 8, 1885, Governor John A. Martin issued a proclamation declaring Thomas County duly organized with 1,108 square miles. Naming Colby as the temporary county seat and appointing temporary officers. On November 17, 1885, an election was held with Colby the people’s choice for the permanent county seat. Colby was chosen as the county seat with only 13 opposing votes. Soon, the first county officers were elected. The county’s townships were named after the soldiers that died at the Battle of Chickamauga. The population in December 1885 was reported as 2,500. 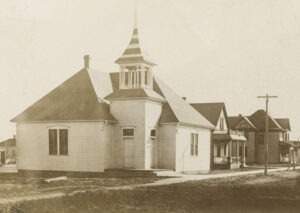 Since most of the land in the county was homestead or railroad property, it couldn’t be taxed. Initially, the county officers rented space in which to work. In May 1886, the citizens raised money, and a frame two-story 30′ x 30′ building was soon erected for a courthouse.

The Colby Christian Church, founded in 1886, was the first church.

In 1889, Dr. Mary Hay homesteaded on 160 acres of land in Thomas County. She was the foster mother of two children. She was registered as a doctor of medicine by the Kansas State Board of Health after a recorded medical practice of 20 years. She was a teacher of a private day school and the public supervisor of education in Thomas County. She organized the first Sunday school in the county (Episcopalian) and later served as the minister. She was also the founder and owner of the town of Otterbourne, Kansas, and its first postmistress in 1881.

In 1890 the population of the county was 5,538. In the next ten years, there was a decrease to 4,112, but there was a substantial increase during the next decade, the population in 1910 being 5,455. By that time, there were post offices in Brewster, Colby, Gem, Halford, Kingery, Levant, Menlo, Mingo, and Rexford. 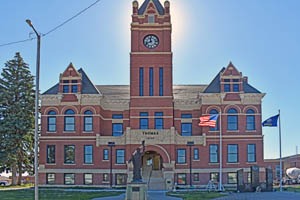 In 1906, a new Thomas County Courthouse was erected with the issuance of $50,000 in bonds. The Romanesque-style building with detailed limestone continues to be used today. It is listed on the National Register of Historic Places. 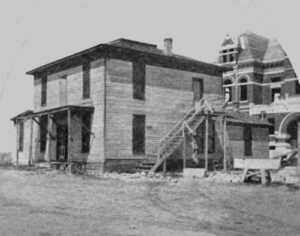