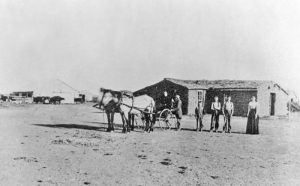 An old homestead near Gem, Kansas.

The area was first called Gem Ranch when it was established on land owned by J.W. Ellsworth. However, when it received a post office on December 14, 1885, it was shortened to Gem.

In 1886, John Houston, originally from Tennessee, moved his family to Thomas County and is identified with some of the pioneer farmers in the area. One of his children, P. Sherman Houston, would grow up to become an important part of Gem’s progress. 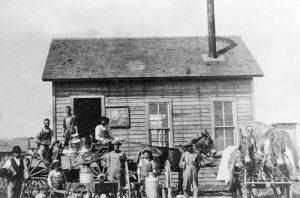 By 1887, three railroads were making plans to build their tracks within the county. One of these was the Chicago, Kansas, and Nebraska Railroad, later known as the Rock Island Railroad, which had laid tracks as far as Norton in Norton County. However the railroad refused to extend its tracks unless the people of Thomas County would pay them $60,000, the C. K. & N. Railroad was going to stop at Norton. In a bond election, the funds were approved and the tracks were laid to Colby in 1888. Depots were established at Rexford, Gem, Levant, and Brewster.

The town of Gem was officially organized in the summer of 1887 and was close to the Reed homestead. The Reed family were the first settlers of Thomas County. After Gem became a shipping point on the railroad, the settlement began to grow. 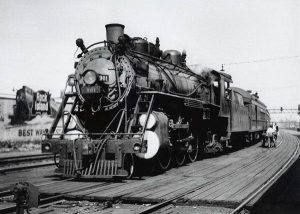 In 1906, P. Sherman Houston moved his family from his nearby farm to Gym. Though he had attended public school at Gem as a youth, he remained on the farm for years, supervising extensive ranches and farms in the area, comprising 7,500 acres. His cattle operations included some 700-800 head on his pastures. When he moved to Gem, he was engaged in the real estate business and was an interested party in the Gem State Bank.

By 1910, Gem continued to be a station on the railroad, had a bank, a money order postoffice with one rural route, telegraph and express offices, telephone connections, Baptist and Methodist churches, good public schools, several mercantile establishments, and a branch of the Colby Mill and Elevator company. At that time, the population was 275, which was probably its peak. 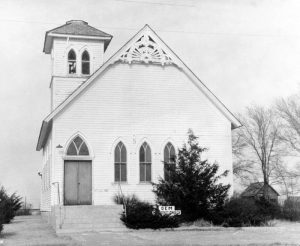 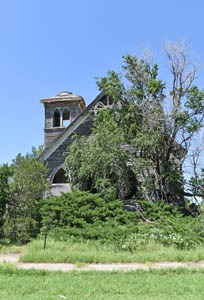 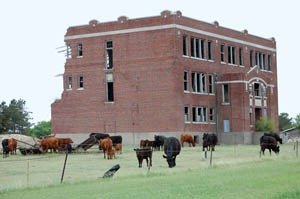 The old school in Gem, Kansas is in ruins today by Dave Alexander.

In 1911 P. Sherman Houston became president of the Gem State Bank, which was established in 1905. He also had varied business interests including owning a grain elevator at Gem and another one at Goodland.

In 1921, a three-story brick school was built in Gem. On the top floor was the high school, with the elementary grades, a gymnasium with a stage, and a lunchroom below. At one point there was some contention as to whether dancing should be allowed in the Gem School. So, “bootleg” dances were held in the back room of the grocery store run by Wanda and Hickie Hickman, with sawdust on the floor.

In 1966, the area schools were consolidated and the old school was abandoned. The Gem post office was closed in March 2014. 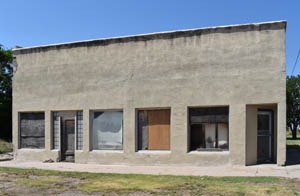 Today, the old school continues to partially stand as a lonely sentinel over the town, testifying to more prosperous times. However, it has been taken over by cattle, its windows shattered, and its back half has fallen in. There are no open businesses and its churches are overgrown. However, this small town continues to hang on with several homes and about 85 people.

The Gem Cemetery on the west side of the town contains a fenced-in area that contains the headstones of the once-prominent Houston family.

Gem is located about nine miles northeast of Colby, Kansas. 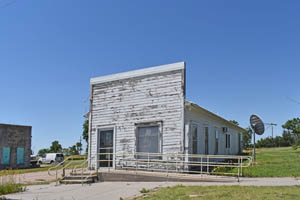